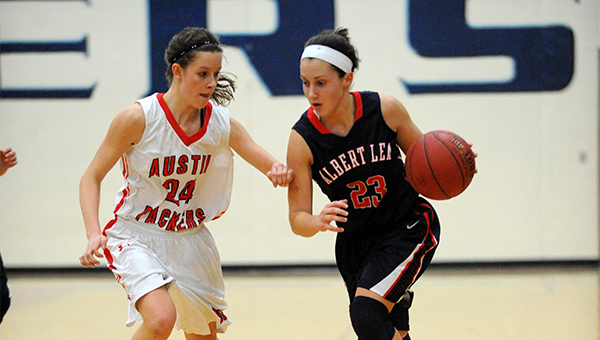 The Albert Lea girls’ basketball team caught fire from behind the arc to even the regular season series with Austin.

Austin won the first meeting 63-54 on Dec. 10. The Tigers countered by crushing the Packers 56-38 Tuesday in the rematch in Albert Lea. 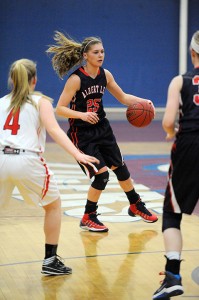 Sydney Rehnelt of Albert Lea looks to pass the ball into the paint Friday at home against Austin. — Micah Bader/Albert Lea Tribune

“They were looking for the open kid, and they were moving the ball,” she said. “They were kicking it out and crashing the boards.”

After the opening tip, Austin took a 4-0 lead. Albert Lea cut its deficit to one point with Kortan’s first 3-pointer.

The Tigers took their first lead of the game (14-12) when Kortan hit a pair of free throws. From that point, Albert Lea took control. The Tigers finished the first half on a 21-4 run, which was capped with a layup by Sarah Niebuhr 5 seconds before the halftime buzzer.

“When our defense plays well, it motivates us to play well offensively,” Rehnelt said. “Part of the reason we won was we changed up our defense to contain No. 23.”

Rehnelt referred to Austin’s Mer Gach. In the game on Dec. 10, Gach scored 30 points. On Tuesday, she was held to 14.

At the 12-minute mark of the second half, Austin whittled its deficit down to 10 points.

However, Rehnelt’s final 3-pointer of the night pushed the lead back to 13 and gave the Tigers the momentum which they held for the remainder of the game.

In addition to scoring, Hugstad-Vaa said her team played well on defense, on the glass and in transition.

“Everything we’ve been working on in bits and pieces came together, which was good to see,” she said. “It was finally clicking.”

The Tigers have been looking for consistency and production in the paint. Fran Eckstrom, Sarah Niebuhr and Caycee Gilbertson provided it. The trio combined with 14 points, eight assists and nine rebounds.

“They did a good job of moving the ball through, and when they had open shots, they knocked them down,” Hugstad-Vaa said.