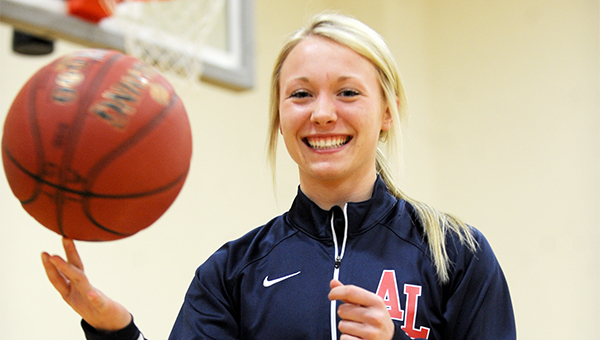 Since becoming a varsity starter her freshman year, Bryn Woodside has been picking the pocket of opposing point guards and darting down the floor for two points.

Scoring in transition along with a solid jump shot and an affinity for driving to the basket pushed Woodside past 1,000 career points Monday at Waseca. 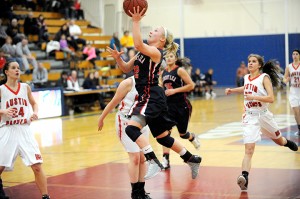 “I was very proud of her,” said Albert Lea head coach Lindsey Hugstad-Vaa. “It’s a huge accomplishment to be in that 1,000-point club.”

Through 13 games this season, Woodside led the Albert Lea girls’ basketball team with an average of 18.9 points per game.

However, scoring is just the tip of the iceberg. Woodside dished out a team-high 48 assists, and she leads the Tigers with 45 steals.

Something that supersedes the stats is how Woodside brings the team together, Hugstad-Vaa said.

“She (Woodside) is a hard worker and a natural leader in the classroom and on the court,” she said. “She notices when people are down and by themselves and includes everyone to make it feel like a team.”

Her brother, Ben, a 2004 graduate of Albert Lea High School, plays professionally for Vanoli Cremona, a team in northern Italy. Before that, Ben averaged 23.2 points per game for North Dakota State University and was the 2009 Summit League Player of the Year.

“When he’d come home in the summer from college, I’d always be excited to work out with him at the (Albert Lea Family) Y,” Woodside said.

Although he is overseas, Woodside said her brother is able to watch her games on Hudl.com, a website designed to help coaches scout talent.

Woodside’s connection to basketball began when she was in preschool.

“I was in Y-ball, and then I started to play traveling

In the offseason, Woodside participated in a basketball camp at Gustavus Adolphus College from fifth through ninth grade, she said.

More recently, Woodside played with Albert Lea teammate Sydney Rehnelt on the Rochester Fury, an Amateur Athletic Union team, and for the last two season’s she’s been a part of the Minnesota Stars basketball organization.

“There’s tough competition, and you don’t know the players you’re going up against,” Woodside said. “I think it was a really good experience.”

Woodside said her goal for the Tigers is to finish in the top four in the conference standings and win the Section 1AAA tournament.

Hugstad-Vaa has been Woodside’s coach the last two years.

“She’s a really inspiring coach,” Woodside said. “She makes me want to work hard for her and my teammates. She’s also very knowledgeable about basketball. It’s fun to play for her.”

Players Woodside looks up to are LeBron James of the Miami Heat, Maya Moore of the Minnesota Lynx, Candace Parker of the Los Angeles Sparks and fellow point guard, Ricky Rubio, of the Minnesota Timberwolves.

“I just like the way that Ricky Rubio passes,” she said.

Woodside signed her national letter of intent on Nov. 19 to play for Jamestown College in North Dakota. She said she plans to major in nursing for her undergraduate degree and then go to graduate school.