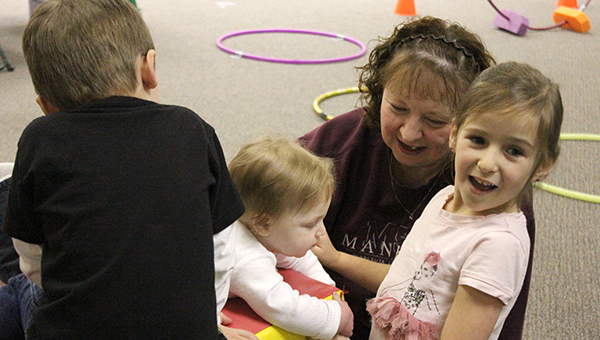 Despite frigid temperatures, parents and children came together to strike some yoga poses during the Fit for Kids club held at the Northbridge Mall on Saturday.

“I am so happy they are offering something free for kids,” said parent Alyssa Morris who attended with her three kids. “There definitely needs to be more activities like this in the community for families.” 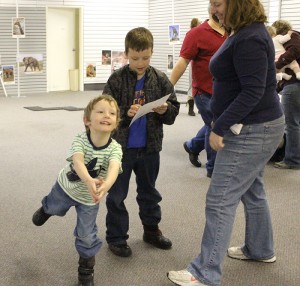 A child demonstrates a yoga move during Fit for Kids club.

The club has met the last four Saturdays and features a weekly activity for children and parents. The club is free and open to parents and their children who are 5 years old or younger. About 50 attended the club meeting on Saturday.

When Blue Cross Blue Shield put out a survey in the community asking parents how they felt about community activities, they found that parents felt there was a lack of activities for preschool age kids.

“What we wanted to do was find some activities for parents and their kids to do, especially in the winter months,” said Jennifer Hanson, an organizer for the event and an early childhood education teacher for the Albert Lea School District.

The club is lead by early childhood staff from the Albert Lea schools. Some of the past activities have included playing with sports balls, line dancing and movement activities.

“It is really fun to teach,” said Alyssa Wachter, a pre-kindergarten teacher. “We get as much exercise as the kids.” 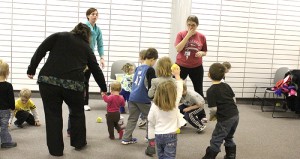 Children follow along during the Fit for Kids club at the Northbridge Mall on Saturday.

Hanson said the program has grown from 23 participants during the first week to about 80 last week.

“It has been really popular,” Hanson said. “Parents really enjoy it because there is something for children of all ages.”

There also has been an increase in dads attending.

“For whatever reason the number of dads coming has really grown,” Hanson said. “They really have fun with it.”

Stores in the mall have also enjoyed an increase in foot traffic.

One dad, Russel Hardeman, took his 1-year-old daughter to the club.

“It is great that she can be moving around,” Hardeman said. “She is just learning to walk so she is moving all over the place.”

The club was created in a partnership between Blue Cross Blue Shield and Albert Lea Department of Parks and Recreation.The next Fit for Kids Club will be at 10:30 a.m. Feb. 5 at the Northbridge Mall.

The club will receive $1 of every adult admission when the Waldorf hockey team hosts St. Thomas on Feb. 15 in Albert Lea.