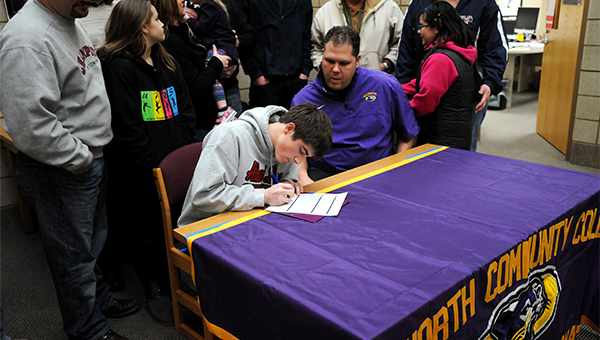 “This is my first recruiting class, being a first-year head coach of the program,” said Akre, the head baseball coach at Ellsworth Community College in Iowa Falls, Iowa. “We’re glad we could be here.”

“I’d say he’s the best shortstop in the Big Nine Conference as we enter this season,” he said. “He feels very comfortable when the ball is hit to him. He has a good arm, good speed and is getting better at driving the ball.”

“We were up recruiting in Minneapolis over Labor Day weekend, and we saw Johnathan playing with the Blizzard program,” Akre said. “We talked to Johnathan right after, and we’ve had great communication ever since.”

Akre said the plan is to play Fleek at second base his freshman year and possibly move him to shortstop as a sophomore.

“He’ll come in and play middle infield for us and hopefully hit somewhere in the top part of our lineup,” he said. “We like the way that he approaches the game. He loves baseball, and he’s going to fill a big need for us.”

Ellsworth Community College is a two-year institution, and some players receive offers to transfer to Division I or II schools.

Fleek said he took three college visits, and two were to Iowa Falls. In addition to the baseball program, he said he enjoyed the atmosphere at the school.

“I like how they run things in the classroom,” Fleek said. “It’s a lot of one-on-one work.”

He said he’ll take general courses and was undecided on a major.

Iowa Falls is about 1 1/2 hours south of Albert Lea. Fleek said he’d be able to drive back on weekends to visit family and friends.

Akre, an Ellsworth Community College alumnus, took the baseball program over for Nate Forsyth who piloted the Panthers the last seven years. Forsyth is the school’s new athletic director.

For the last two years, Akre has been an assistant baseball coach for successful teams at Scottsdale Community College in Scottsdale, Ariz.

“We’ve been in the (National Junior College Athletic Association) World Series the last two years, and we had a third-round draft pick and a 22nd-round draft pick last year,” Akre said. “I’ve been blessed to be around a lot of great players.”

The Panthers start the year with a road game against Rend Lake College in Millington, Tenn. at 10 a.m., Feb. 17.

Fleek with begin his senior season with the Albert Lea baseball team against NRHEG at 4:30 p.m. April 1 at Hayek Field.