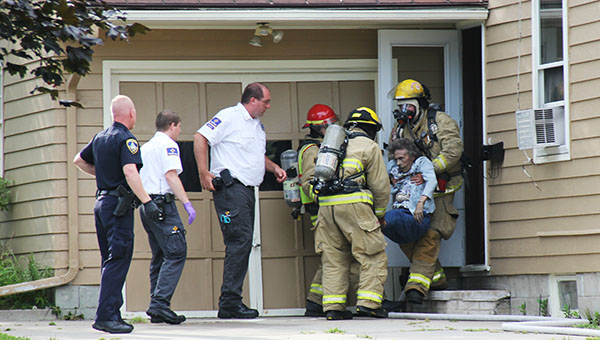 This photograph of Albert Lea firefighters rescuing a 94-year-old woman taken by Tribune Editor Tim Engstrom on the afternoon of Aug. 28 won first place at the Minnesota Newspaper Association convention in the News Photo category among daily newspapers in the state similar in size to the Albert Lea Tribune.

Tribune Assistant Editor Sarah Stultz won first place in the Business Story category among dailies under 10,000 circulation for a piece she wrote for Progress 2013. The story encapsulated the rising costs facing small businesses.

Tribune Assistant Editor Sarah Stultz won first place at the convention among dailies under 10,000 in Business Story for her well-rounded piece that graced the front of the Business & Health section of Progress 2013. It published Feb. 24.

“I really liked the way this story was presented,” the judge wrote. “It helped put into perspective for consumers the types of costs businesses face and then talked about how owners/managers tried to keep prices down. A good consumer piece. Well reported and researched. A clear winner.”

Modderman survived the day; unfortunately, she died the next at Hennepin County Medical Center. The photograph stirred emotions of readers. The family liked it, with Modderman’s daughter commenting that it showed what important work firefighters perform. 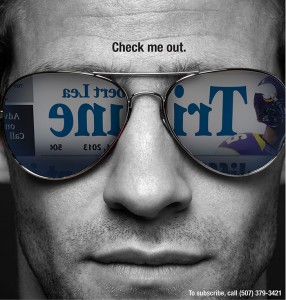 Former Tribune Creative Director Stacey Bahr won second place in the House Ad category among dailies under 10,000 with this advertisement of a man wearing reflective shades.

The judge wrote: “The photographer was right on scene and captured a true ‘life and death’ moment. Nice job.”

Former Tribune Creative Director Stacey Bahr won second place in the category of Self-Promotion or House Ad — in other words, advertisements about the publication — for dailies under 10,000. Her ad was called “Check me out.”

“Great imagery with good use of spot color,” the judge wrote.

Tribune graphic designer Kristin Overland won third place among all individuals — weeklies and dailies of any size — in the category of Advertising Campaign for a series of ads she made for Orthodontic Health Center.

“Excellent concept and strategy for an advertising campaign. Nice layout that can be continued as long as they have customers to offer testimonial,” the judge wrote. 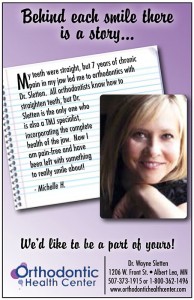 Tribune graphic designer Kristin Overland created a series of ads for Orthodontic Health Center. This is one among many like it, and the series won third place for Advertising Campaign competing against all newspapers in the state.

The Albert Lea Tribune garnered third place among dailies under 10,000 for General Reporting. All entrants had to send in a selection of newspapers from predetermined dates.

The Tribune captured third place among dailies under 10,000 for Sports Reporting, too. It was the first sports award the Tribune has taken home in more than a decade. It, too, had predetermined dates to send to judges.

“The outdoors column should be a big hit in Minnesota. Enjoyed features. Good effort,” the judge wrote.

The Tribune thanks its readers and advertisers for their support.