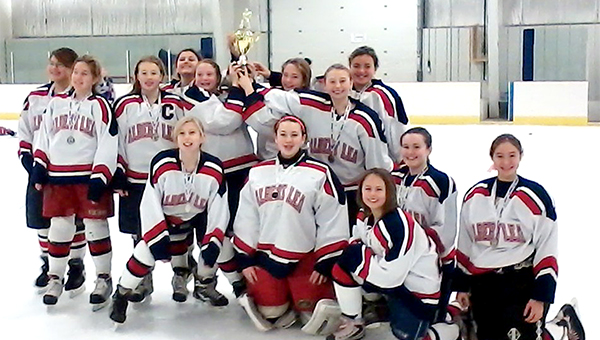 The Albert Lea U12 girls’ hockey team went undefeated to capture the crown at its home tournament on Jan. 5, according to a press release.

Albert Lea finished the tournament that spanned three days with a 4-0 record.

In the first round on Jan. 3, Albert Lea beat Inver Grove Heights 3-0. Hannah Johnson started the scoring in the first period with one goal, and Sydney Collins scored two goals. Assisting on each score was Ally Stanek. 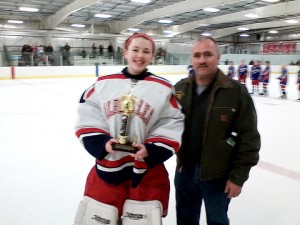 Sky Anderson of the Albert Lea U12 girls’ hockey team holds the goalie award — for the top goalie at Albert Lea’s home tournament — next to Doug Weigel. Weigel presented the award in honor of is daughter Natasha, who was killed in a car accident in November of 2006. Natasha played youth and high school hockey in Albert Lea. — Submitted

Albert Lea’s final game of the tournament on Jan. 5 was a rematch against Inver Grove Heights. Even though Albert Lea was outshot, it won 3-1. Johnson, Stanek and Luttrell each scored goals. Sky Anderson received the best goalie of the weekend award from Doug Weigel in honor of Natasha Weigel.