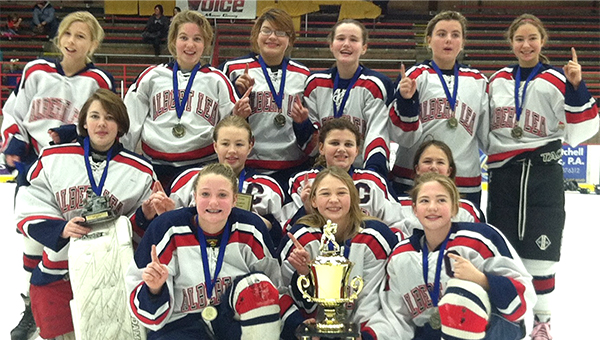 The Albert Lea U12 girls’ hockey team went 3-0 to hoist the first-place trophy at the two-day Austin Packer Classic, according to a press release.

Albert Lea defeated Waseca 6-4 on Jan. 11 in the first game of the tournament. Ally Stanek scored five goals, and Hannah Johnson added one. Lexci Abrego skated hard and had a good game at her forward position. Kylie Sundve was solid at the blue line with many shots on goal to set up scoring chances. 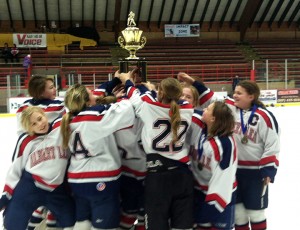 The Albert Lea U12 girls’ hockey team hoists the trophy for first place at the Packer Classic on Jan. 12 after beating Le Sueur 4-0 in the championship game. — Submitted

In afternoon game on Jan. 11, Albert Lea faced tournament Austin and came away won 4-0. The scoring was balanced with goals by Daysha Luttrell, Katie Steven, Stanek and Johnson. Ally Thompson and Ana Hernandez helped preserve the shutout from their defensive positions blocking shots and stopping Austin’s offensive zone rushes. Rylee Bjorklund showed her versatility playing both defense and forward during the game.

Albert Lea beat Le Sueur 4-0 in the championship game on Jan. 12. Sydney Collins notched her first goal of the tournament with solid play at her left wing position, while Johnson added two goals and Luttrell scored once. Riley Hanson, a defenseman, was credited with an assist on the first goal of the game. Using her speed on defense, Adison Malakowsky forced the Le Sueur forwards away from goalie Sky Anderson and into poor shooting angles.

Albert Lea’s next tournament will be Feb. 8 and 9 at New Ulm.