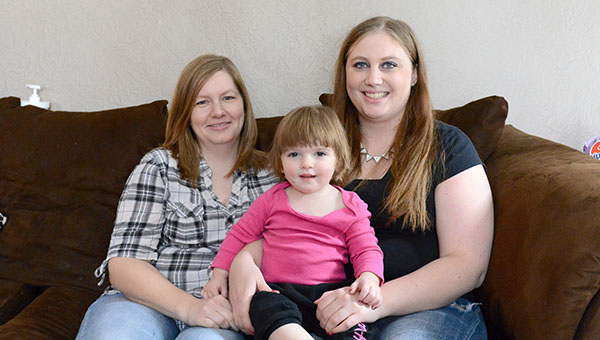 An Albert Lea woman now has three kidneys after a transplant surgery on Nov. 5.

Emily Baseman, 25, has had issues with her kidneys since she was little, but initially doctors didn’t think that was the problem.

“They said it was just a virus,” said Baseman’s mother, Kristin. “But she kept complaining at school.”

So back to the doctor Baseman went. This time doctors thought she was dehydrated, and they were going to admit her into the hospital, Kristin said.

In the meantime, they found that Baseman’s kidneys were failing so she was sent to Rochester.

Baseman was about 9 years old when doctors told her family she had developed nephritic syndrome, a group of disorders that cause swelling or inflammation of the internal kidney structures, from a strep infection.

For the syndrome, Baseman received dialysis and made a complete recovery.

From then until 2003 she had yearly checkups that were clear. In 2003, though, doctors found swelling and did a biopsy, Kristin said.

What they found was dense deposit disease. After a lot of tests, Baseman and her family were told that not only did she have kidney failure, but she had kidney disease.

She started on Prednisone, an immunosuppressant drug.

“Emily did fine,” Kristin said, “But then she started having anemia and started getting weekly injections.”

Eventually those injections were lessened to monthly.

Problems flared up again, though, in the last year.

“I was tired a lot, it was hard to be active and I was throwing up,” Baseman said.

Doctors wanted to do another biopsy, but Baseman’s kidneys were too small and scarred. So in June she started dialysis for the second time and was placed on a transplant list.

In the meantime, members of her family started getting tested to see if they could be live donors. All of the ones who were tested matched.

“It was a good feeling knowing my family was there and wanted to do it,” Baseman said.

Her aunt, Petra Uthke, was the first one to get testing done so she went on to be tested further at the Mayo Clinic in Rochester.

Uthke said there was no hesitation when it came to donating one of her kidneys to her niece.

“I just wanted to give her a better chance at life,” Uthke said. “It’s hard seeing her on dialysis.”

Kristin said other families they talked to said it was unusual to have a match so quickly.

“It was a sense of relief,” Kristin said. “If she didn’t find a live match, it could have been five years. We were so lucky everything went fast.”

Baseman and Uthke’s surgeries were scheduled for Nov. 5 at the Mayo Clinic.

Baseman’s surgery was to last between three and four hours and Uthke’s was between two and three hours.

“I wasn’t really scared until the day of,” Baseman said. “I was just worried I wouldn’t make it out.”

Both women did a lot of praying and knew they had the support of their friends and family.

Both surgeries went as planned. Uthke stayed in the hospital two days for recovery. Baseman stayed in Rochester for three weeks as she recovered so that she would be close to her doctors if anything went wrong. After some time in the hospital, Baseman was moved to the Gift of Life Transplant House.

While at the transplant house, it was required that Baseman had a caregiver, so Kristin, and friend, Danielle Mittag, kept her company.

Kristin said it’s not only the friends and family that the Basemans have to be thankful for. It’s their co-workers, too, who had to fill in for them while they were out of work.

Baseman’s life is back to normal, or as normal as it can be while taking medicine for the rest of her life so that her body doesn’t reject the new kidney she nicknamed Little Johnny.

Even with the medication, there is a chance of rejection at any time.