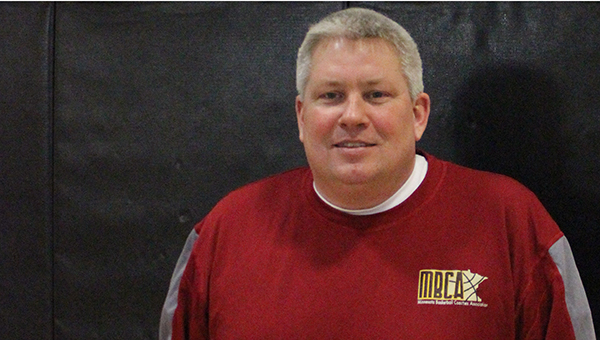 ALDEN — Bob Hansen is trying to create a basketball culture at Alden-Conger High School, much like the one he experienced growing up in Freeborn.

Hansen is in the middle of his first season at the helm of the Alden-Conger boys’ basketball team, the Knights are currently 1-11 on the season.

“I believe it’s possible to create a winning culture,” Hansen said. “The big thing is lack of numbers. Some kids don’t participate because of the losing culture. Trying to turn positive attitudes and get the kids believing in themselves, that they can do it, is key.”

Hansen used the example of the New Richland-Hartland-Ellendale-Geneva High School basketball program, where winning at the high school level has led to more players in the youth levels.

“If you look down through their grade-school levels, they’re successful because they get the kids out and those kids want to be just like the older kids,” he said. “I look at our program and you get a couple kids that want to be successful and the others are out there just because.”

Hansen is a farmer, who also does some contracting on the side. He took over the family farm after going to two years of vocational school after high school. He also helps coach youth hockey and golf.

Basketball has been in Hansen’s life for a long time, he played it through high school and enjoyed traveling around to watch local teams play after he graduated from Freeborn High School. He said that a group of five players in his grade grew up playing together, which led to success on the court.

He’d like to see the same scenario eventually play out at Alden-Conger.

“Us five hung out together, we did things together at a group,” Hansen said. “That’s one thing I don’t see here, I think because we have such different ages. I think some of them go out after the games for pizza, but I used to remember back in high school we would get together and go to some little town’s gym and shoot baskets.

“We wanted to be successful and that’s what it takes,” he added. “A lot of extra work to get over that hump.”

Before getting the varsity head coach job, Hansen was the junior varsity coach for three years and was the eighth-grade coach for one year.

Hansen said that a lot of parents like to second-guess coaches and think that they could do a better job, but few act upon those notions. He did.

“The other parents were like ‘why don’t you do it?’” he said. “So I jumped on board and grabbed the bull by the horns and went after it. So that’s how I look at it.”

Hansen said he sought advice from his former high school coach, who simply told him to focus on the fundamentals.

“He was always a stickler of that when I played. We worked on fundamentals a lot,” Hansen said. “He had the same drills every day just to drill them into our head and it made us a better team because we were fundamentally sound.”

The Knights have been in games this season but, as their record shows, not many have gone in their favor. Recently Alden-Conger relinquished a 10-point lead in its 63-58 loss to Cleveland.

“We had a 10-point lead and their coach called a timeout and they came out and got a couple good baskets and you could see that we were deflated, the ‘here we go again’ attitude,” Hansen said. “They went on a run, and we played them even the rest of the game. We did pull back and got it to within two points with 20 seconds left, but we had to foul and they hit their free throws.”

Hansen said he wants his players to not get psyched out by teams that they can beat, and try to relax.

“Maybe it’s just because they’re uptight when they know it’s going to be a tight game,” he said. “We just need that extra step to get us over the hump and to a victory.”

Interesting fact: He never really intended to become a basketball coach. He said it just kind of happened.