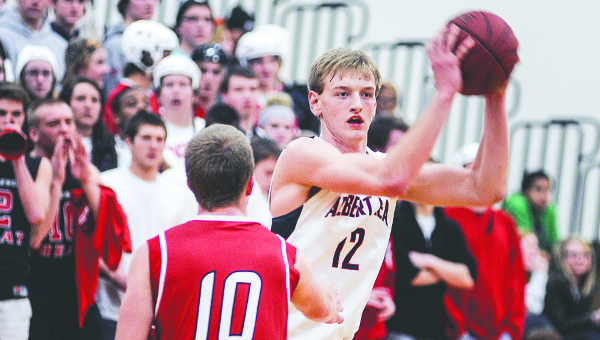 The Albert Lea boys’ basketball team made up ground Friday at No. 6 Austin in the second half, but the Packers built too big of a cushion in the first half.

Austin took a 15-point lead into halftime before winning 56-44. 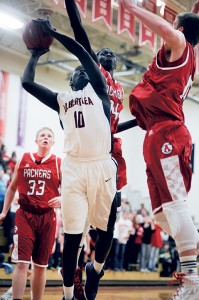 Albert Lea’s Goding Wal goes up against the defense of Austin’s Gach Gach and Bret Lukes, right, during the first half Friday night in Austin. — Eric Johnson/Albert Lea Tribune

The second half was a different story as the Tigers outscored the Packers 24-21.

“We held them to five field goals in the second half,” Kreuscher said. “I thought our defense was good and scrappy.”

Cody Scherff led Albert Lea with a double-double: 11 points and 10 rebounds. He has battled back from a fracture in his face early in the year.

“Cody may have played his best game for us. He really brought a lot of toughness,” Kreuscher said. “He took over like a senior should. When he was able to get rid of his goggles last week, he’s been more aggressive and rebounding better.”

Tyler Vandenheuvel scored nine points and grabbed four rebounds in his second game back from a knee injury this fall.

“Tyler’s getting there,” Kreuscher said. “He hit a big 3 down the stretch for us, but there’s still room for improvement.”

Albert Lea cut its deficit to seven points with four minutes left, but were unable to make more of a dent. Shooting at the free throw line came back to bite the Tigers. They were 10 of 21, and Austin was 16 of 18.

Kreuscher said he’s optimistic for the rest of the season.

“We’re getting healthier and deeper,” Kreuscher said. “If we stay focussed on getting better each night, we’ll be OK.”