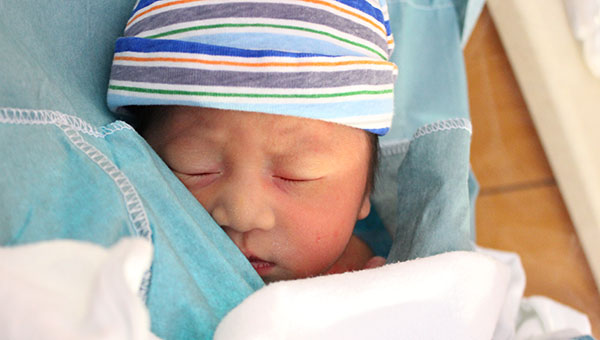 Albert Lea’s Baby New Year sleeps peacefully Friday in The Baby Place. The baby, which had not been named as of Friday morning, was born at 5:30 a.m. Thursday. — Sarah Stultz/
Albert Lea Tribune

Born at 5:30 a.m. Thursday at The Baby Place in Mayo Clinic Health System in Albert Lea, the baby girl weighed 6 pounds, 2 ounces and was 18 3/4 inches long.

As of Friday morning, she had not yet been named. 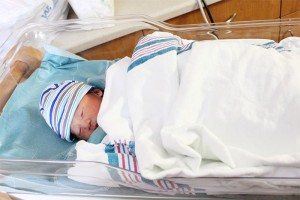 The newborn is the daughter of Hai Moo and Law Say, who moved to Albert Lea five months ago from Thailand. Say works at Albert Lea Select Foods.

“I’m happy,” said Moo, 24, in her native language of Karen, a Burmese dialect, on Friday. Moo communicated with the Tribune through a Martti device, a computer that audio conferences with an interpreter.

Moo, who declined to have her photograph taken, was looking at a list of baby names in her hospital room and said she was considering the name of Emily Say.

The new mother said she started having contractions at about 11 p.m. Wednesday and came in to the hospital at about 1 a.m. Thursday. Four and a half hours later, she delivered the baby naturally. Obstetrician Ealena Callender was her doctor.

Moo said the newborn has been sleeping most of the time since her birth and is doing well other than being jaundiced. On Friday, she wore a Biliblanket, which uses phototherapy to reduce bilirubin levels.

She was the only baby in the maternity ward Friday.

Moo’s nurse said the family may be released from the hospital Saturday, depending on the baby’s bilirubin levels.