Winds were strong on Thursday in Albert Lea, and there was plenty of blowing snow, but was it a blizzard?

A blizzard, according to the National Weather Service glossary of terms, requires the following conditions to prevail for three hours or longer: sustained winds or gusts of 35 mph or greater and considerable falling or blowing snow, reducing visibility to less than a quarter mile.

It doesn’t seem the weather in Albert Lea met that definition, despite Freeborn County being on the edge of a blizzard warning for the day. But it came close. 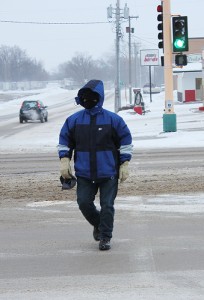 It would be safe to say the city experienced near-blizzard conditions. The strongest sustained wind measured at the municipal airport was 25 mph, with a gust up to 41 mph. However, most of the day the northwest wind was between 10 and 20 mph with gusts between 25 and 35 mph.

Some other parts of Minnesota clearly met the definition of blizzard. Crookston, for instance.

Two jackknifed semis on Interstate 94 between Alexandria and Osakis prompted MnDOT to shut down that portion of the highway from mid-morning to early afternoon.

Morris recorded a wind gust of 52 mph just before noon while Appleton had a gust of 49 mph.

Two Kennedy firefighters rescued a driver stranded on Highway 11 after he ran off the road and ran out of gas early Thursday. Kittson County Sheriff’s jailer Tim Nordine said people risked their lives by going out in the storm to get him.

The Minnesota Department of Transportation issued a travel advisory for many areas of the state, including Interstate 35 through Freeborn and Steele counties, because of icy patches forming on the roadways.

Even so, people managed to travel safely to work and home. Albert Lea and several area schools dismissed classes on Thursday.

Freeborn, Faribault, Steele, Waseca, Mower counties and pretty much all of Minnesota south of Brainerd this morning are in a winter weather advisory today. The National Weather Service says it is in effect until 6 p.m. today. That’s because blustery winds were expected to deliver more blowing snow, which could make travel difficult.

Wind chill values for Albert Lea this morning were expected to dip as low as 20 below. The high for the day was forecast at 8 degrees above zero.