Carjacker at large after standoff 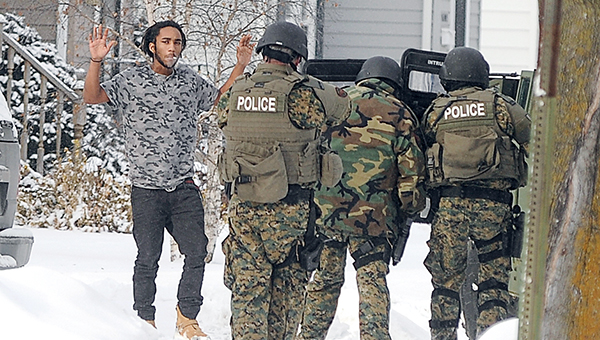 A 17-year-old approaches members of the Austin Special Incident Reponse Team after leaving the home of a standoff on Eighth Avenue NW Tuesday afternoon. The teenager was one of two people arrested at the home. –Eric Johnson/Albert Lea Tribune

AUSTIN — Antonio Smith wondered why so many officers were at his home on Eighth Street Northwest on Tuesday afternoon. He didn’t know his nephew, Thomas Kendricks III, and another man were accused of carjacking, and he didn’t realize Kendricks came to Smith’s home after Smith had left for work.

He certainly didn’t know police would surround his home as part of an almost nine-hour standoff which ended at about 6:30 p.m. Tuesday.

Police are still searching for 22-year-old Kendricks while Smith tries to make sense of what happened.

The standoff, the seven people who left the home under police watch, the two teens arrested during the standoff, and the horror of learning his 9-year-old son was in the house for most of the standoff left Smith shocked.

“This has just been ridiculous,” he said at about 3:45 p.m. “I can’t believe this is all happening.”

Kendricks is one of two men who allegedly carjacked a blue Nissan Sentra using a gun in Mankato at about 12:30 a.m. Tuesday morning. Austin Police received word of the crime at about 9 a.m. Tuesday, and shortly after found the car parked in front of the Eighth Street Northwest home, according to Police Chief Brian Krueger.

Police surrounded the home and evacuated residents by 10:15 a.m., eventually cordoning off the block while calling in a police Humvee and the city’s Special Incident Response Team.

Smith was at work in Albert Lea when he first heard the news from his wife, whom he calls every day during his 10 a.m. work break. In hysterics, Smith’s wife told him police had surrounded his home, and that his nephew and 9-year-old son were inside. He wanted to leave for home but was convinced by his wife and police to stay at work.

“They said they had it under control,” he said. “I wanted to come home and get back in the house instead of going through all of this. I don’t think this was necessary, but the police have got to do what they’ve got to do I guess.”

Meanwhile, four people left the home by 11 a.m., including two people who rent an upstairs apartment. At the time, police thought two men, including Kendricks, were still inside with Smith’s son and another female. It wasn’t until later Tuesday police found out Kendricks likely left the house before officers came to the scene.

Smith’s wife had left the house before Kendricks and another man arrived, and Krueger said Smith’s wife cooperated with authorities once officers arrived on the scene.

Authorities drove the police Humvee in front of the home and used a megaphone to ask Kendricks and the others to surrender themselves. No one responded, according to Krueger, though police could see a figure standing near a window on the home’s second floor.

Police took action shortly before 2:30 p.m., first cutting power to the home then moving their Humvee onto Smith’s lawn. Four response team team members slowly made their way to the house and used what appeared to be a flash-bang grenade after breaking a window. Shortly after, Smith’s son walked out the front door, barefoot and in pajamas, where he was scooped up by officers and taken away from the scene. A few minutes later, a 15-year-old female left the house and was subsequently arrested. A 17-year-old boy, who police believe is connected to the carjacking, left the home a couple minutes after that and was also arrested.

After taking both teens into custody, police spent the next several hours trying to contact Kendricks. Officers eventually entered the home to look for Kendricks at about 5 p.m. Though police didn’t find Kendricks, they used an Albert Lea Police Department robot to find a gun possibly connected to the Mankato carjacking in the basement. The standoff wrapped up by 6:30 p.m., but many residents still felt the standoff’s effects.

Mike Case lives near the Smith house and was at home sick with his daughter, Heather, Tuesday morning. The two heard yelling coming from Smith’s home at about 9:20 a.m., as Heather was getting ready for classes.

“I heard a lot of car doors slamming and it sounded like someone was coming home,” she said. “I looked out the window and I saw a car in our driveway. It was an undercover one, so I didn’t think of police, but I looked farther down and saw sheriff’s cars.”

By the time the Cases came outside, police had already surrounded Smith’s home. Mike said the duo and the family dog left the area shortly after 10 a.m. The two were sitting in a car two blocks away from home at about 1:45 p.m., as Mike wanted to wait nearby for his wife and children to come home.

“We’ve received invites from neighbors to come hang out with them,” Mike said at the time.

Kendricks is still at large, while charges are pending for the two teens arrested at the scene. Krueger said Mankato police would interview the teens either Tuesday night or today to try to determine if they were involved in the carjacking. Krueger urged anyone who has information on Kendricks’ whereabouts to call the police.

Smith, meanwhile, won’t likely forget the day police surrounded his home, or the way his wife sounded on the phone.

“She was hysterical, crying,” he said. “She told me what was going on, the police outside, Thomas and his friend in the house with my kid. She was just worried about getting in, getting my son.”