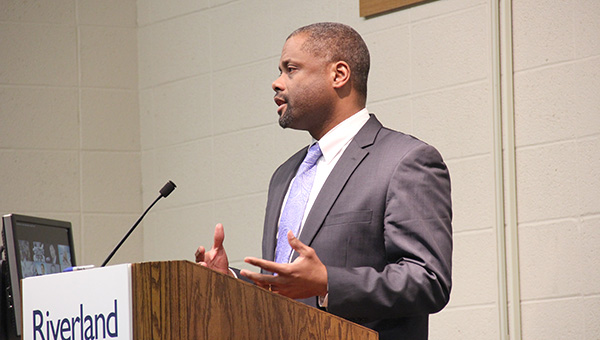 His comments, citing King’s “Letter from a Birmingham Jail,” came at the 26th annual Martin Luther King Jr. Celebration in Albert Lea. For 25 years, the event was held as a breakfast, usually at Bethany Hall of First Lutheran Church. This year, it was an evening gathering at Riverland Community College. About 50 attended.

Community members came together to remember King during the celebration that included music and stories.

The celebration began with remarks from Linda Cruz-Lares, an Albert Lea resident and the cultural diversity specialist at Semcac Community Action Agency. 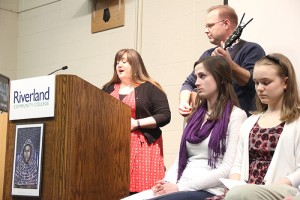 “Our hope is to continue to affirm the dream of hope, peace, justice and equality on this day of service,” Cruz-Lares said.

“Dr. Martin Luther King really knew how to accept change. He really looked at change as an opportunity for our community and also for civil rights,” Rasmussen said.

The mayor encouraged attendees to embrace change in their own lives.

Lindsey said “Letter from a Birmingham Jail” asked the question, “How do we change our society?” The letter defends the right of moral people to break unjust laws.

Lindsey said Alabama Gov. George Wallace, who stood at the door of the auditorium in an attempt to block the entry of two black students, was an example of why change in the courts doesn’t always change attitudes.

“The question King is asking is ‘When will moral people be moved to act?” Lindsey said.

Lindsey said the “I Have a Dream” speech was really about freedom and jobs. He said in the past few years, the economic climate has been difficult, but there has always been a large divide between the employment rates of white and black Americans.

“If you don’t have the ability of economics to sustain yourself and your family, what good does it do you to have those legal rights?” Lindsey said.

Dr. Thoburn Thompson also shared his experience about the 1963 March on Washington. Thompson was on a bus with people from New York, arrived in Washington and went into the basement of a church.

“We marched and we all wore ties — no jeans. We marched among people of all stations, all ages and all colors. It was a privilege,” Thompson said. 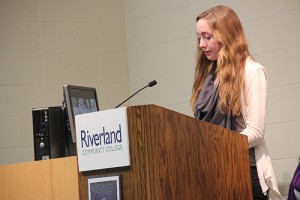 They were told that if someone spat on them or said something, they were not to respond in anger.

Thompson said there were arguments about who would speak first, but King was selected.

On April 3, 1963, protests against segregation began in Birmingham. King came to help lead the protests, and after choosing to continue after a law was made banning them, he was arrested on April 14. Eight white clergymen from Alabama published “A Call to Unity,” criticizing King and his methods. King wrote his famous “Letter from Birmingham Jail” in response to their criticisms.

The clergymen agreed that social injustices existed but thought racial segregation should be fought in the courts. King argued that one has a moral responsibility to disobey unjust laws.

King was also criticized for demonstrating in a community he wasn’t a part of. King argued that all communities are interrelated. He wrote “Injustice anywhere is a threat to justice everywhere. Whatever affects one directly, affects all indirectly.”

The celebration, which included music by Cassie Schreiber, closed with the crowd singing “Let There Be Peace on Earth” in unison with Schreiber.