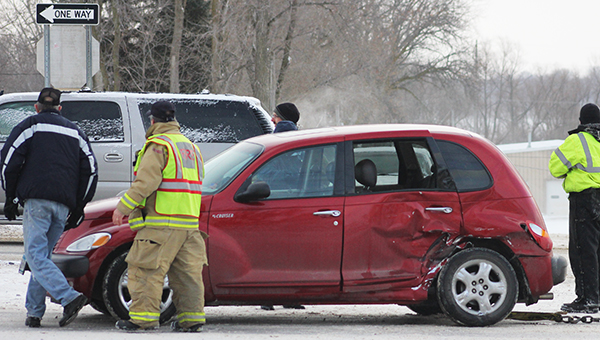 Emergency crews responded to multiple reports of crashes involving injuries on Tuesday as drivers dealt with slippery roads and blowing snow both in and around Albert Lea.

One person was reportedly injured in a crash at the intersection of St. Peter Avenue and East Main Street afternoon, according to initial reports.

At 7:51 a.m., Albert Lean Amy Bohlen, 22, was driving northbound on Interstate 35 a mile south of the Trail’s Travel Center exit in a 2010 Honda Civic when she spun out and hit the rear duals of a 2009 Freightliner semi also headed northbound.

Bohlen’s passenger, Max Knudtson, 94, of Glenville, was transported to Mayo Clinic Health System of Albert Lea for injuries that were not life-threatening, according to the Minnesota State Patrol.

Bohlen and the semi driver, Steven D. Betts, 59, of Mansfield, Mo., were not injured.

All three were wearing their seat belts.

At 11:07 a.m., an Iowa man was injured after he reportedly lost control of the semi he was driving and ran off the road north of Albert Lea.

Gary F. Donaldson, 50, of Clive, Iowa, was reportedly driving northbound in a 2012 Kenworth semi near milepost 13 on I-35 when the crash occurred, according to the State Patrol. The road was listed as icy.

Donaldson, who was transported to Mayo Clinic Health System in Albert Lea, received injuries that were not life-threatening, the report stated.

He was wearing his seat belt.

At 3:57 p.m., a 2006 Toyota Tundra headed northbound on I-35 reportedly lost control and rolled near the Geneva exit.

The road was listed as icy at the time of the crash.