Global warming, climate change, greenhouse effect, hottest years on record — call it what you will. Don’t judge whether it exists based on what the weather is like in the Upper Midwest.

The frigid air from north central Canada that dropped down into the United States — called a polar vortex —does nothing to prove or disprove climate change. No single weather instance does. Measuring trends over the long term is how climate change is determined. 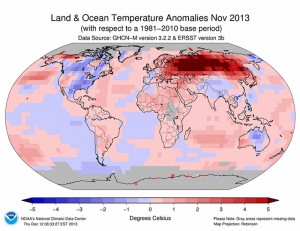 To the right is a good example from November. It was the warmest November on record for our fair planet. This map shows much of Canada and Mexico along with the eastern half of the United States, including Minnesota, as being a degree or two Celsius colder than the 30-year average. However, most of the globe, especially the oceans, appear a degree or two warmer. A large portion of Russia appears four or five degrees warmer.

It is difficult to judge the entire planet based on what happens in Minnesota. It is difficult to judge trends for the entire planet based on a single weather event. A cold snap no more disproves global warming than a heat wave proves it. By the way, Australia had been sweating through 120-degree temperatures, smashing records.

People must remember that climate and weather are two different things. Weather happens day to day. Climate is the historical record and the long-term outlook.

Want something that really counts? November marked the 345th consecutive month with a global temperature above its 20th century average. In other words, the globe is warmer than it normally had been. 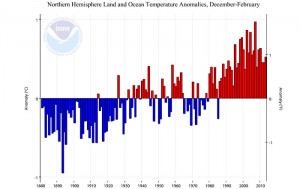 from the National Climatic Data Center

This graph to the left shows that winter temperatures have risen in the northern hemisphere in recent decades. It starts at 1880 on the left and grows to 2013 on the right. It’s pretty simple to understand.

We still have occurrences of deep freezes and cold snaps, but the difference, according to scientists worldwide, is the reduction in frequency. We have them less often because of greenhouse gases people put into the atmosphere.

Right or wrong or how to solve the problem are other matters. Debate them thoroughly. But denying that greenhouse gases are changing the planet would be plain foolishness.