Kim Raben of Stewartville and Brian Toot of Albert Lea announce the engagement of their daughter, Amy Toot, to the Rev. David Stoeger, the son of Jeff and Robin Stoeger of Manitowoc, Wis., and Laurie Stoeger of Mapleton. 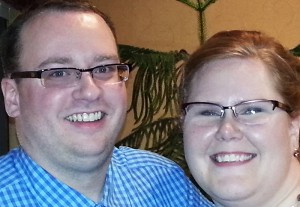 The groom’s grandparent is Karl Stoeger of Manitowoc.

The groom is a 2004 graduate of Lincoln High School in Lake City, a 2010 graduate of Rochester Community and Technical College with a degree in liberal arts and a 2012 graduate of Crossroads College of Rochester with a Bachelor of Science degree in business administration and biblical studies. He is employed as the managing editor of the Spring Grove Herald and as a pastor at Mabel and Newburg United Methodist churches.

An April 5, 2014, wedding is planned at Newburg United Methodist Church.