For more than 35 years, a single curator has overseen treasured documents 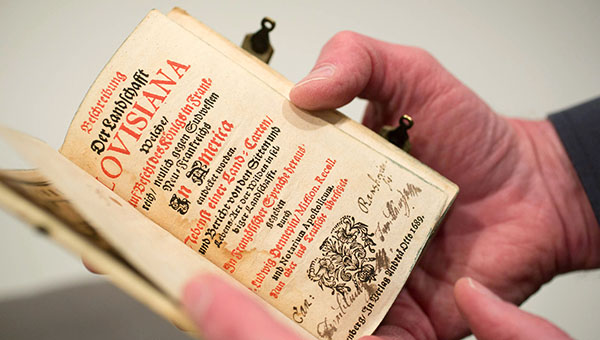 But the basement library stacks also store surprises, among them a sheet of paper on which Bob Dylan wrote the words to “Temporary Like Achilles.”

“Handwritten by Dylan,” said acquisitions librarian Patrick Coleman, “It came on the market about 20 years ago, and I bought it.”

For 35 years, Coleman has overseen the state’s collection of maps and books.

The historical society’s treasure trove of history includes everything from 500-year-old travel histories by Father Louis Hennepin to bodice ripping romance novels, thrillers by Vince Flynn and everything in between. 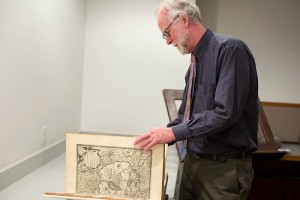 Acquisitions librarian Patrick Coleman pages through maps in a 1595 Ortelius Atlas that is part of a collection of rare items at the Minnesota Historical Society Tuesday in St. Paul.

One of its more unusual objects in the collection is an entire North Shore tourist cabin, walls and roof — the whole thing.

“This is Cabin No. 3 from the Star Harbor Resort on Lake Superior north of Two Harbors,” notes the historical society’s description. “The cabin was built about 1910 and stood on the North Shore and right off of Highway 61 until 1990, when it came to the society. Star Harbor was the first cabin resort located on Minnesota’s Lake Superior shoreline.”

The society has more than 500,000 volumes in its library collection representing more than 2,500 authors, said Coleman, 61, one of six curators. It also has maps hundreds of years old by Italian, French and Spanish cartographers.

Part of Coleman’s job is to tell a committee what he thinks the society should buy. There’s consultation on anything costing more than $5,000, a relatively easy threshold to reach since some items on the global historic documents market sell for five and six-figure sums.

The hand-written Dylan lyrics for “Temporary Like Achilles,” for example, cost $10,000. As the society’s library annual acquisitions budget is $40,000, Coleman routinely seeks money from private donors to help acquire items.

He calls the maps “pure history.” They tell the story of the region as seen by outsiders hundreds of years ago.

The French were prolific map makers because of their huge economic stake in the fur trade. But those early cartographers were often way off the mark.

One created four large, non-existent islands in Lake Superior and named them after patrons in Paris, confident no one would make the trip to check his accuracy.

Many old maps have vivid almost comic-book-like illustrations that, true or not, influenced Europeans’ ideas about the New World.

“Vignettes of Indians burning out dugout canoes, drying fish, and there’s even I assume a missionary being roasted on a spit,” Coleman said as he showed an example to visitor.

Besides keeping an eye on the world document market for possible acquisitions the St. Paul native is also in touch with local collectors, including members of The Ampersand Club for tips.

Coleman said some of the most valuable and unusual items in the collection are from local sources.

He recalls being new to his job when a woman from Anoka called with a remarkable question: “I was wondering, If I gave you a 1595 Ortelius Atlas of the World what that would mean to you?”

Abraham Ortelius was a European cartographer famous for an atlas with the most authoritative maps of that time.

Coleman was elated when the woman agreed to give the book to the historical society rather than to Harvard or Yale, also in the running for the gift.

A more unusual personal contact helped Coleman acquire a very different sort of document, a guide to whorehouses in St. Paul at the turn of the last century.

A man living in an abandoned St. Paul building, appeared in Coleman’s office one day and handed him the booklet he found in a wall as he tore away wood to build a fire to stay warm.

Coleman said people often call to ask to if the historical society wants the family Bible.

The answer is often, “no,” except for photocopies of pages in the Bible where people write down the names of the family members.

“And that I want. . . for anybody coming in to do genealogy,” he said. “It can save people days worth of time if we’ve got something like that.”

Coleman said the reason to acquire and keep documents is to have a cultural record of what has happened and why.

The items in the Dakota collection, the most extensive in the world, may be some of the most sobering and thought provoking. Among them is the original treaty of 1858 between the United States and the Yankton Sioux, signed by the Indians under duress.

Visitors cannot check out materials but the society’s collection is open to everyone for viewing and study.