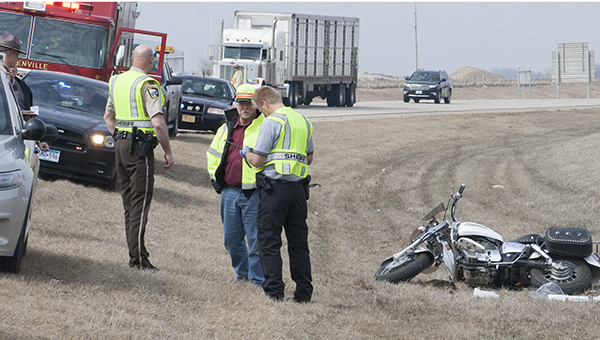 Freeborn County Sheriff’s Office deputies and other authorities respond to a fatal motorcycle crash on Interstate 35 on April 8 about four miles north of the Iowa border. –Sarah Stultz/Albert Lea Tribune

Traffic fatalities within Freeborn County saw a slight decrease in 2013 from the prior year.

According to Tribune records, there were three fatalities within the county, one of which stemmed from a driver who suffered a medical condition prior to the crash. 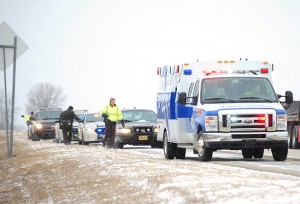 Across the state, there were 368 traffic deaths, according to preliminary numbers from the Minnesota Department of Public Safety. Most law enforcement agencies do not count crashes stemming from medical conditions.

The following is a brief synopsis of each crash in Freeborn County:

• Albert Fraser Bailey, 75, of Burnsville died Jan. 30 after his vehicle went off of Interstate 35, through a fence and into a field four miles north of the Iowa border.

The Minnesota State Patrol stated Bailey was driving northbound on I-35 when he crossed through the median, across the southbound lanes, into the west ditch, up the embankment, through the freeway fence and into a field.

The vehicle, which was not identified in the report, came to a stop facing north on the west side of the freeway. It sustained no damage.

The State Patrol indicated Bailey suffered a medical condition that resulted in the crash. The report stated Bailey was the only person in the vehicle and was found with his seat belt on and his foot on the accelerator.

• James H. Grunewald, 62, of Austin died April 17 from injuries he sustained in a crash on April 8 on Interstate 35.

Grunewald lost control of his 2001 Honda Road Star motorcycle about three miles north of the Iowa border near Round Prairie Lutheran Church, according to the Minnesota State Patrol. He was not wearing a helmet and was thrown from the motorcycle.

The Minnesota Department of Transportation closed the southbound lanes of the interstate one mile south of Freeborn County 13 to allow a Mayo One helicopter to land. He was taken to St. Marys Hospital in Rochester.

• Maureen Vyonne Ruble, 80, died Oct. 25 after she was struck by a minivan as she walked across Freeborn County Road 46 west of Albert Lea to check her mail.

Ruble had walked to her mailbox on the south side of the road at 72746 County Road 46 and was walking back to the north side when she was struck by a 2003 Chrysler Town and Country minivan, driven by Mary Charlotte Stoneback, 65, according to the Sheriff’s Office. The van was headed westbound.

The Sheriff’s Office stated Ruble was struck by the front passenger side of the vehicle. She died from her injuries at Mayo Clinic Health System in Albert Lea.

Ruble was the co-facilitator of the Southern Minnesota Parkinson Disease Support group.

A search of the Tribune website will reveal that the media outlet reported on several other fatalities on area roads in 2013, but they were outside the borders of Freeborn County.