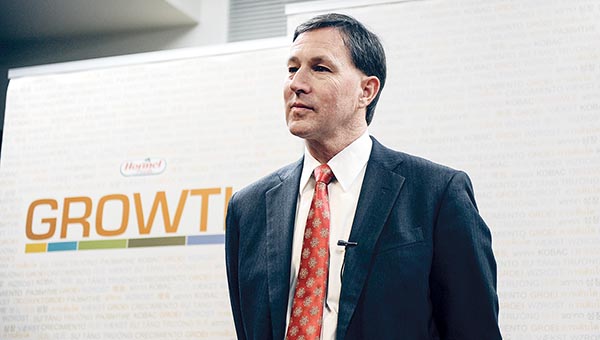 Hormel CEO Jeff Ettinger speaks about the company’s 2013 and what lays ahead during a press conference before the annual shareholder meeting Tuesday night at Austin High School. –Eric Johnson/Albert Lea Tribune

AUSTIN — With another record year, another increase in annual stock dividends and a rosy forecast for 2014, Hormel Foods Corp. took the stage to showcase its growth during the company’s annual shareholder meeting Tuesday.

“We do think there’s excellent opportunities outside the U.S.,” Hormel President and CEO Jeff Ettinger said. “We’re looking for another excellent year from Hormel International.”

Ettinger said the company plans to continue leveraging brands such as Skippy and Spam in its push into the Asia market, particularly in China, along with strong growth potential in the United States. The company grew its international sales by 38 percent from 2012 to 2013, and Ettinger said he expected international sales to continue to grow at a faster rate than the rest of the company. Hormel recently opened a production plant in Weifang, China, and highlighted its international line’s 13 percent sales growth over the past five years. 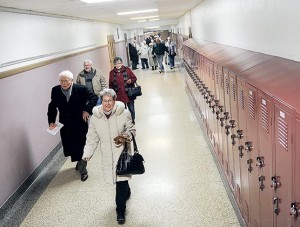 Ettinger said the company continues to focus on its annual goal of 5 percent sales and 10 percent earnings increases as well.

The company has had significant success in the past decade acquiring companies, merging them with Hormel’s existing products and growing them. The company bought Jennie-O in 2001, Farmer John in 2004, Valley Fresh in 2006, MegaMex Foods and all of its Mexican food subsidiaries in 2009, and Country Crock in 2010, just to name a few.

Skippy has done well for Hormel since the company bought the brand for $700 million last year, bringing the No. 2 peanut butter in the U.S. market into the company. Skippy accounts for about 30 percent of the company’s business in international markets like Canada and China, according to James Snee, president of Hormel International. Snee gave the featured presentation at the annual stockholder meeting.

Ettinger said the company bought Skippy with the goal of bringing more product lines to the market over a two-year period, and he expected more Skippy products to hit shelves in 2015.

“We’d like to see Skippy take the product out of the jar,” Ettinger said.

Spam celebrated its 75th anniversary in 2012, and the company increased the brand’s marketing presence to help lead strong sales in Hormel’s grocery and international divisions. In January 2013 the company acquired Skippy peanut butter from Unilever, which also brought a projected $100 million annually in international sales, including $30 to $40 million in China. Now Hormel hopes those two products mean continued growth in its international division, which while increasing, only accounted for 9 percent of its operating profit in 2013.

The company isn’t without its concerns, however. Hormel’s specialty foods division had a down year, according to Ettinger, and the company is keeping an eye on the recent swine flu virus infecting piglets at hog farms across the U.S. — including at some of the few Hormel hog farms in Colorado.

Despite that, Ettinger believes the company will be able to continue its steady growth throughout 2014.

“It’s all about growth right now,” he told stockholders.