Hy-Vee Gas building to go up this week 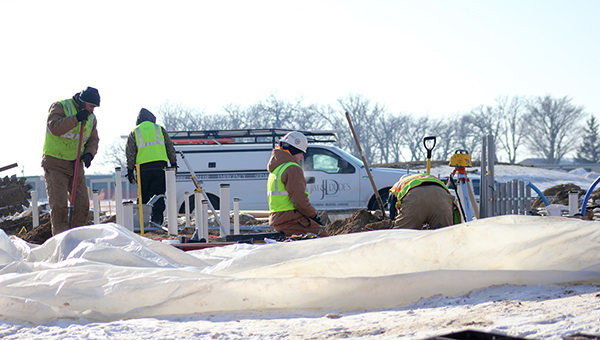 The bone-chilling cold weather the past couple weeks has been a hindrance to a lot of construction projects in the upper Midwest.

The Hy-Vee Gas project in Albert Lea was no exception; however, project foreman Mark Indrelie is still hopeful for an early April opening of the new gas station.

“Normally this time of year we get a 50/50 work day versus the weather being too cold,” Indrelie said. “But the last three weeks have been just brutal. We couldn’t get anything done. Machines didn’t start.”

Indrelie said crews have been able to keep the ground thawed, but it takes two hours at the end of each day to make sure the ground-thawing equipment is in place and another two hours the next morning to take it off. 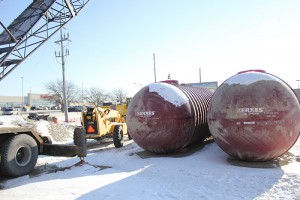 Two gas tanks sit on the site of the new Hy-Vee Gas station. The tanks should be put into the ground this week.

With the warmer temperatures, things are looking up for the project. Indrelie said the store walls should go up this week.

“The plan is to start putting the building up Wednesday,” he said on Thursday. “A week from today it’s going to look a lot different. You’re going to start seeing a lot of activity, and hopefully the weather holds up.”

The biggest reason the cold was holding up the construction was because it needs to be a certain temperature to pour concrete.

“You’ve got to have above 20 degrees,” Indrelie said. “Some people say 24 degrees is the magic number, but there’s things we can do to help that along. We have the ground-thawing machine, so once we get it poured we can throw that back over to keep the heat in there.”

The new store will be 4,500 square feet and will include the same number of fuel pumps as the old station. It will have a lot more amenities than the old building.

“It’s a full-service fuel station,” Albert Lea Hy-Vee store director Al Weisert said. “Inside there will be a sit-down Caribou Coffee, a wider variety of food offerings and a hot and cold expanded beverage bar. There will be a meals-to-go section. We’ll continue to carry the gifts and novelty items that are for sale and then a drive-thru Caribou.”

The Caribou Coffee inside the Hy-Vee store across from Bridge Avenue from the gas station will remain open. Hy-Vee, which is based in West Des Moines, Iowa, has 235 stores in eight Midwestern states. It has 10 gas stations in southern Minnesota.