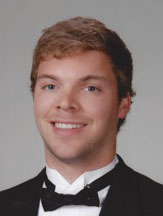 Jean Marc Ellul Street, loving son, brother and friend to so many, died on Jan. 11, 2014. His extraordinary, loving kindness, strength of character and sensitivity to others will live forever in the many lives he touched.

Jean Marc was born in Minnesota on Oct. 14,1991, to his parents Carla Peterson Street and Mark Ellul. He grew up in Atlanta, where he graduated from The Lovett School. Senior year he was presented the J. Harry Lang award for the best lineman and highest character as a Lovett Lion football player.

Jean Marc was an athlete, musician and an active outdoorsman with an entrepreneurial spirit. He spent several recent summers as a landscaper at S&W Landscaping, a firm he co-founded.

Since 2010, Jean Marc had also directed a charity, the LSS Foundation, which was focused on developing micro-enterprise outreach programs in developing countries. On a recent trip to Kenya he conducted a conference and community meetings to educate local residents about micro-loans and how to apply for them.

Jean Marc is survived by his father and mother; sister, Cynthia Constance Street; brother, Conley Hampton Street; and his stepfather, Phillip Street. The memorial service will be at 11 a.m. Thursday at Peachtree Presbyterian Church in the sanctuary.

In lieu of flowers, friends and family may make a donation to the “Jean Marc Street Research Memorial / BRAINnet.” Checks may be mailed to 400 River Vista Drive, Atlanta, GA 30339.

Jean Marc said recently that his life purpose was “to achieve my goals, to feel proud and happy knowing that I have contributed to a greater whole.”

In honor of his life purpose, The Jean Marc Street Research Memorial has been established as a division of BRAINnet Foundation, an independent nonprofit organization focused on brain science. The purpose of the Jean Marc Street Research Memorial is to fund critical research focused on the improvement of human well-being, one of the most important and urgent targets of modern science by studying the brain. The World Health Organization, World Bank and Harvard University rank this mission the most important in the 21st century.