Memorial services for Jeanette Marcelyn (Jean) Hanson, 87, of Albert Lea will be at 11 a.m. Wednesday at First Presbyterian Church in Albert Lea. The Rev. Dwight Netzer will officiate. Interment will be in Hayward Cemetery in the spring. Visitation will be from 4 to 6 p.m. Tuesday at Bayview/Freeborn Funeral Home and one hour prior to the service at the church. Online condolences are welcome at www.bayviewfuneral.com. 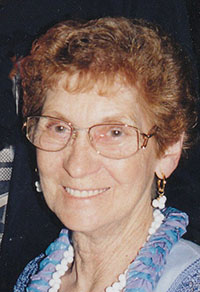 Jeanette was born in Williams, Iowa, on June 13, 1926, to Arthur and Helen (Wicks) Jean and went home to her heavenly father on Tuesday, Dec. 24, 2013, at Mayo Clinic Health System in Albert Lea.

She was baptized and attended the Lutheran Church, in Williams. Jeanette attended country schools in Franklin County, graduating at age 16 in 1942, from Popejoy, Iowa.

Jeanette married Clinton Raphael Hanson on Aug. 29, 1948, at the country Methodist Church near Alden, Iowa. They moved from Iowa Falls, Iowa, in 1956 to a farm near Hayward. She was a member of First Presbyterian Church in Albert Lea since 1956 teaching Sunday school and Bible school for many years.

Known by many as “Freckles,” a nickname given to her by her brother, Red, Jeanette started her work career as a telephone operator, living with a good friend, Marlys Bolstad, who later became her sister-in-law. Never one to shy away from hard work she put in her time well, but it was at night on the dance floor that Jeanette really came alive. Many nights found her dancing to big band music – and it was at one of those dances that she danced into Clint Hanson’s arms – her life partner for the next 59 years. Meeting in January of 1948, engaged in June and married in August, they enjoyed a long and loving marriage.

Jeanette’s next work was as a farmer’s wife and mother. When her youngest daughter went to school she began working outside the home, eventually settling into Wallace’s in Albert Lea. Always good with numbers she quickly became head of the drapery department. During her years at Wallace’s, she met many of her lifelong friends. Jeanette finished off her work career at the local Day’s Inn, as head of housekeeping, a job she always said was her favorite. In addition, Jeanette was a talented seamstress, sewing beautiful clothing for herself and her girls.

Jeanette enjoyed traveling on her vacations, with trips to Colorado and riding the Amtrak to Montana 14 years in a row. She was incredibly supportive of her daughters in all their endeavors and loved her grandchildren, great-grandchildren and great-great-grandchild. She was a quiet observer of the world around her taking it all in. Her gentle spirit will be missed by her friends and family. Blessed be her memory.

She was preceded in death by her father and mother; husband, Clint Hanson; sister and brother-in-law, Lenore and Cleo Bauldry; sister, Patricia Nelson; brother-in-law, Jeff Rasmussen; and mother and father-in-law Hans and Hazel Hanson.