Local governments within Freeborn County had about $1.2 million in damages from the severe storms last June.

Freeborn County officials released the final number Tuesday after the last claim for repair and emergency response was approved for reimbursement through the Federal Emergency Management Agency.

Freeborn County Emergency Management Director Rich Hall said 75 percent of the cost of repairs is being reimbursed through FEMA and 25 percent through the state. Entities have 18 months to complete any repairs. 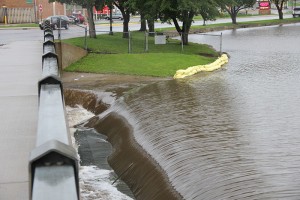 Water gushes over the dam at the outlet of Fountain Lake in June after heavy rain. Sandbags protect the shoreline near the dam. –Tim Engstrom/Albert Lea Tribune

Hall said a majority of the damages — about $934,000 — was to ditches throughout the county. The Freeborn County Highway Department had about $93,000 in damages.

The storms, June 20-26, resulted in debris and damage to public infrastructure and utilities, along with flooding to numerous homes. Many ditches were filled with dirt and gravel that was swept off the roadways.

In addition to debris removal and infrastructure costs, cities and townships could submit claims for extra manpower and emergency measures that were taken to protect the public.

The county was eligible for funding after President Barack Obama in July issued a federal disaster declaration for 18 counties, including Freeborn County, affected by the storms and flash flooding. The disaster did not include individual assistance.

The Legislature approved the state funding during a special session in September.