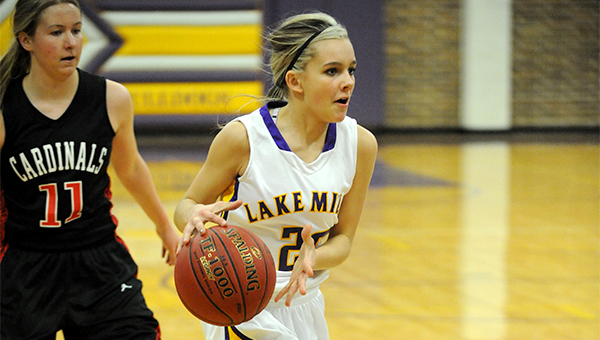 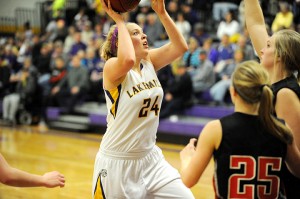 Mary Evans of Lake Mills shoots the ball in the paint Friday at home against Garner-Hayfield/Ventura. Evans led the Bulldogs on the glass with nine rebounds. She also had four points and two assists. — Micah Bader/Albert Lea Tribune

The Cardinals’ defense proved to be the difference as Lake Mills lost 59-30.

Garner-Hayfield/Ventura pushed its lead to double digits in the first quarter. The Cardinals jumped out to a 6-0 lead, but Lake Mills fought back with a 3-pointer by Jewell Gasteiger and a 15-foot jumper by Emily Orban. Orban led the Bulldogs with eight points.

“Emily knocked down some shots and looked to attack a little more,” Evans said.

In the second quarter, Garner-Hayfield/Ventura had its most productive quarter of the game offensively. The Cardinals outscored the Bulldogs 19-8 and extended their lead to 21 points at halftime.

“Most of the points we gave up were out of transition that they created with their defense,” Evans said. “That was my main concern going into the game.”

Lake Mills (2-8 overall, 2-3 North Iowa Conference) played its best quarter defensively in the third, when the Bulldogs held the Cardinals to eight points. Evans said that’s something his team can build on along with the 68-51 win at West Hancock on Tuesday.

Despite a widening gap on the scoreboard, the Bulldogs continued to hustle.

“Tonight’s loss wasn’t for lack of effort,” Evans said. “The kids worked hard. Things just didn’t go our way as often as we needed them to.”

The Bulldogs have another tough test at 7:30 p.m. Tuesday when they host Osage. Osage (9-1 overall, 4-1 North Iowa Conference) was undefeated until it lost 40-38 at Forest City on Friday. However, the Green Devils maintained their first-place spot in the conference standings.

“They’re another team with some size and length,” Evans said about Osage. “It’s obviously going to be another challenge, but we’re going to go back to work and give it our best shot as we do every night.”