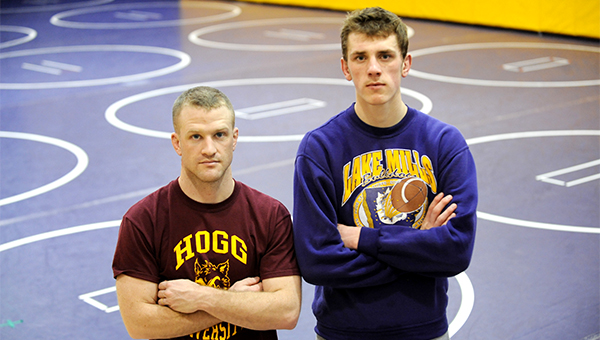 LAKE MILLS — Every win for the rest of the season will be a new school record for Lake Mills wrestler Noah Irons.

Irons — the No. 6-ranked grappler in Class 1A at 152 pounds according to The Predicament — broke Brad Helgeson’s mark of 123 career wins that had been gathering dust on the wall of the wrestling room at Lake Mills High School for the last 13 years.

In a home quad on Tuesday, Irons pinned Clarion-Goldfield’s Dakota Hennigar and Jordan Weiland of West Hancock to claim the record and set it for the time-being at 125.

Irons didn’t stop there. At the Hampton-Dumont Duals on Saturday, he pinned four of his five opponents, beating them all in less than 2 minutes. His other match was a win by forfeit. Those wins didn’t come solely on natural skill. Irons has a solid work ethic to compliment his talent, said Lake Mills head coach Alex Brandenburg.

“Noah’s a hard worker,” he said. “He leads by example. He’s been a little more vocal this year, but he’s still quiet in general.”

The soft-spoken Irons agreed with his coach.

“Sometimes I can get pretty ornery, but not very often,” he said with a smile. “He (Brandenburg) wants me to be mean and aggressive, and it’s kind of hard. I guess I’ll have to work on that.”

In the offseason, Irons honed his craft by traveling to wrestling camps at Northwestern University, The Citadel — a military university in Charleston S.C. — and Luther College in Decorah, Iowa.

After qualifying for the state tournament as a sophomore, an injury kept him from repeating the trip to Des Moines as a junior.

“Once I realized I couldn’t wrestle in sectionals, I turned my focus to my teammates,” Irons said. “When the season was over, I knew I had to recover as soon as I could to get into track and work hard in the offseason. I knew this was my last shot to do something down at state.”

Irons said he has higher hopes than just qualifying for state.

“This year, I’d like to be on top of the podium and win it all,” he said. “I’ll see where I stand next Saturday.”

Irons referred to the meet at Lake Mills at 10 a.m. Saturday against five teams, including United South Central and North Butler.

Irons will also have a chance to take on a talented wrestler from Minnesota. Derek Herman of USC is No. 4 at 152 pounds in The Guillotine’s Class A poll.

Irons had a flair for wrestling since a young age.

“I started practice when I was 4,” he said. “My parents took me in for fun. They said I’ve always been pretty good at it, and I’ve always loved it.”

Outside of wrestling, Irons said he enjoys the outdoors.

Irons is a three-sport athlete: He plays football and competes in track and field and wrestling.

On the gridiron, Irons held his ground as a 152-pound right guard. On defense, he was an outside linebacker.

For track and field this spring, Irons plans to throw the discus and a compete in distance races like the 1,600-meter run.

For his future after high school, Irons applied to the Air Force Academy.

“I’m waiting to hear back from them, and I got a nomination from Congressman (Steve) King,” he said. “If that doesn’t work out, I’m looking at Concordia College in Moorhead. I’d probably wrestle there and major in engineering.”