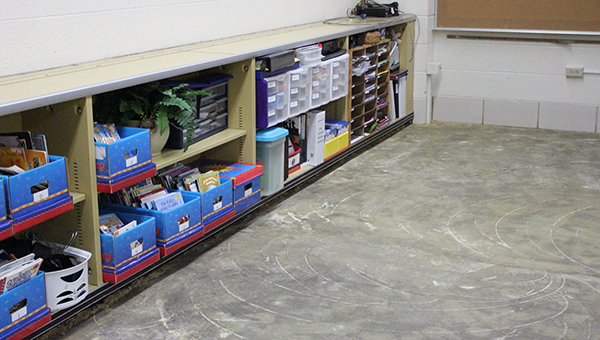 Carpet had to be taken out at this Lakeview classroom due to flooding. –Tiffany Krupke/Albert Lea Tribune

Eight classrooms at Lakeview Elementary School were affected by a pipe that burst last Monday morning.

Rooms damaged include a special education room, a first-grade classroom and a second-grade classroom. There was no structural damage, and children were slated to return to their rooms by Monday, said school principal Mike Fugazzi. 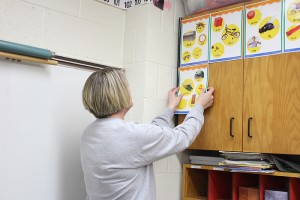 Dawn Ware, an interventionist at Lakeview Elementary, helps put a classroom back together on Friday. Water from a burst pipe made several classrooms unusable. –Tiffany Krupke/Albert Lea Tribune

The school was closed Jan. 6 due to cold when the pipe burst, prompting school officials to cancel school on Jan. 7.

The pipe burst under the sink in a second-grade classroom. The pipe was just old, said Fugazzi, and didn’t break because of the cold. When the boilers were shut off to fix the pipe, an automatic vent opener became cold and broke.

The break in the 50-year-old system caused leaking in the building, said Fugazzi. The building was without heat for three hours.

The library began flooding Thursday, but staff was able to collect the water quickly. The room was still drying out on Friday.

“It has been pretty amazing,” said Dawn Ware, an interventionist for the school. “Within five minutes, we had 15 people in there collecting water. We were able to get it contained pretty quickly.”

Since the pipe burst, Fugazzi said people have been working 12 to 15 hours a day to get the classrooms back in operation.

“It has been overwhelming how quickly we have got things back up and running,” Fugazzi said. “Everyone has been willing to pitch in.”

Students in the affected classrooms have been able to rotate classrooms, sometimes sharing rooms with other classes.

Ceiling tiles and carpet have been replaced in a few of the rooms, said Fugazzi. If the carpet got too wet, it was replaced. 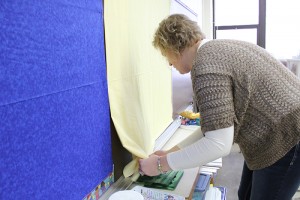 Work has been done by local businesses Floor Tech and Jim & Dude’s.

Teachers, staff and carpet layers were in the building on Friday, repairing the damaged rooms.

One of the classrooms was for second-grade teacher Lisa Haney. A group of teachers and staff members helped Haney put art back on the classroom walls.

Haney said she was overwhelmed by the support she received.

“You are just amazing guys,” Haney said with tears in her eyes. “Seriously, this is just awesome.”

Haney said the kids have been excellent with the transition.

“It has been pretty smooth,” said Tonya Prouty, a special education teacher at Lakeview who helped put the room back together. “Everybody chips in and it has been all hands on deck.”

It remains unclear the extent of the damage to school property like books or other equipment, said Fugazzi. He wasn’t able to estimate the cost of repairs.