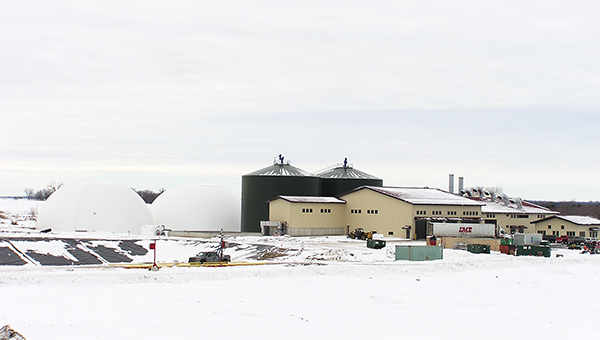 The Hometown BioEnergy plant in Le Sueur in southern Minnesota has started producing electricity over the past month. Located just south of town, it uses methane gas from decomposing corn waste and manure to make electricity. –Mark Steil/MPR

LE SUEUR — On the far side of the state’s newest renewable power plant lies the heart of a nearly $45 million operation designed to produce an abundant supply of energy.

Past a maze of storage tanks, ductwork and pipes in the new plant are two huge digester tanks, each of which holds about 1.6 million gallons of vegetable waste and cow manure.

When the slurry of corn silage and manure is broken down by tiny organisms called methanogens and fermented, it creates methane gas to fuel four electricity generators that will send eight megawatts directly to the city of Le Sueur’s distribution system.

The plant in southern Minneosta is still going through its startup phase, but should be at full production in two or three months, said Kelsey Dillon, vice president of Avant Energy, which will manage the system.

The bioenergy plant is owned by the Minnesota Municipal Power Agency, a collective of a dozen Minnesota communities serving about 70,000 customers.

Dillon said the Le Sueur project is the largest anaerobic digester to electricity facility in the state. Most of the other digesters in Minnesota are on-farm systems that turn manure into methane gas.

Although the plant is operating as expected now, there were some unexpected problems along the road to completion.

“The biggest challenge with this project is that it’s new to the region,” Dillon said. “There’s a lot of history with anaerobic digestion facilities in Europe. But when it comes to contractors and engineers and vendors in the U.S., people aren’t as familiar with it.”

Dillon said that unfamiliarity lead developers to underestimate the cost of the project at $30 million. When the final price tag came in at about 50 percent higher, it provided an opening for skeptics, among them Le Sueur City Council member John Schultz, who said he’s been criticized as having a ‘bad attitude’ for his persistent questioning of the bioenergy project.

At one point Schultz and others in town tried to force a referendum on whether the plant should be built. They were concerned that the plant might cause excessive odor and truck traffic among other things.

Schultz also questioned the sharp rise in the construction cost.

“We did a petition 14 months ago to have an election in our town about this event,” he said. “We had 645 signatures, which is more than 25 percent of our election turnout in our last general election.”

City officials challenged the petition and the whole thing ended up in court where a judge ruled against holding a special election on the bioenergy plant.

“I wish I would know, but once again until we have transparency we’ll never know what’s going on within that project,” Schultz said.

Avant Energy hasn’t released detailed information on what led to the increased costs. But it doesn’t have to under state law. For the most part, municipal utility companies are not regulated by the Public Utilities Commission, or any other state body. They’re not required to have an open bidding process, where project costs would be revealed to the public. They also set their own electric rates.

The rationale behind the law is that state supervision is unneeded because another public body is already doing that, said Mike Bull, director of policy and communications for Minneapolis-based Center for Energy and Environment.

“Because municipal utilities are effectively regulated by their city councils, they are not subject to state regulation,” Bull said.

There is one area of state oversight. City utility companies are required to meet Minnesota’s renewable energy mandate. By 2016, the Minnesota Municipal Power Agency must acquire 17 percent of its electricity from renewable sources. The Le Sueur bioenergy plant is a step in that direction.