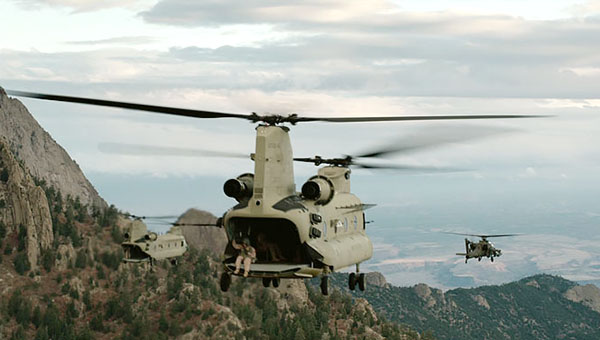 Chinook helicopters in the movie “Lone Survivor” are shown flying over mountains in Afghanistan in this publicity image. Corey Goodnature of Clark Grove was a Chinook pilot.

CLARKS GROVE — The parents of Corey Goodnature, an Army helicopter pilot from Clarks Grove who was killed in Afghanistan in 2005, do not intend to see the movie “Lone Survivor,” in which their son is briefly portrayed.

The movie debuts nationwide today. Showtimes at Cinema 7 in Albert Lea are 4, 7:05 and 9:40 p.m. The film, written and directed by Peter Berg and starring Mark Wahlberg, is based on the bestselling nonfiction book, “Lone Survivor: The Eyewitness Account of Operation Redwing and the Lost Heroes of SEAL Team 10” by Marcus Luttrell, a former Navy SEAL.

Don Goodnature said neither he nor his wife, Deb, have read the book. He said the book comes up short in sharing the heroics of the 160th Special Operations Aviation Regiment, and that has been a sore subject for members of the unit, based at Hunter Army Airfield in Savannah, Ga.

He said his son’s helicopter crew risked their lives just the same as the Navy SEALs on the ground. He said Corey’s best friend was in Afghanistan, too, and dislikes the book and, in turn, its author for downplaying the helicopter rescuers.

Warrant Officer Corey J. Goodnature, 35, of Clarks Grove, was one of 16 killed when his company’s MH-47 Chinook helicopter was shot down June 28, 2005. He was part of a special helicopter crew called the Night Stalkers. Normally, helicopter rescues were performed at night, but this one happened during the day. They were attempting to rescue four SEALs who remained missing in the mountains of Kunar province. The helicopter had eight SEALs and eight Army special operations soldiers inside when it was downed.

By the time survivors and bodies were recovered from that area of Afghanistan, Luttrell was the only survivor out of the four original SEALs in the mission — hence the name of the book and movie.

Chinook helicopters in the movie “Lone Survivor” are shown flying over mountains in Afghanistan in this publicity image. Corey Goodnature of Clark Grove was a Chinook pilot.

An enemy fighter got lucky with a rocket-propelled grenade, Don said, and downed the Chinook. Corey was a 1988 graduate of Albert Lea High School and earned a degree in aerospace engineering from the University of Minnesota in 1991.

Corey, in the film, and another helicopter pilot are portrayed by actors Gregory Rockwood and Ryan Kay, with the parts labeled merely as Chinook Pilot No. 1 and Chinook Pilot No. 2, according to the Internet Movie Database.

Don said he is flattered, in concept, that a movie would be made related to his son’s service in Afghanistan.

“The mission was important at the time,” he said.

He said the SEALs his son were there to rescue had been attempting to discover the whereabouts of al-Qaida leader Osama bin Laden, who later was killed by SEALs in 2011 in Pakistan, and during this mission in particular they had been tasked with capturing or killing Taliban leader Ahmad Shah, who ended up being killed in 2008 by Pakistani police.

Movie producers approached Corey’s widow, Lori, about photos of him to be shown during the credits. Don said she signed a waiver releasing her from royalties. Don also shared some of what he knew about the crash with the movie producers.

He wanted to quash any rumors that he or his family would receive any royalties from the film. Moreover, he said they wouldn’t want them.