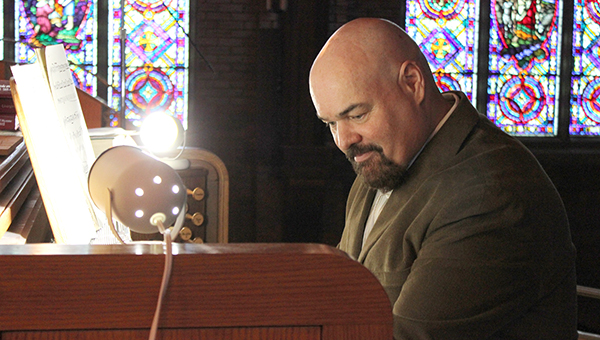 Tim O’Shields plays the organ at First Lutheran Church. O’Shields took over as minister of music for the church in October after working as a chemist in Colorado for 20 years. — Tiffany Krupke/Albert Lea Tribune

From his place in front of an organ, Tim O’ Shields says things couldn’t get any better.

O’Shields is the minister of music at First Lutheran Church in Albert Lea, a position he secured after working as a chemist in Colorado for 20 years.

O’Shields took the position this October and said he is happy to finally be doing what he loves. As minister of music, he plans services, writes responsive readings and directs the churches’ choirs. O’Shields plays the piano, keyboard, organ, french horn and trombone. He spends his Sundays running up and down the 24 stairs that lead to the balcony where he plays his organ during services.

O’Shields was born in South Carolina but spent most of his life in Colorado. His faith began at an early age, as did his love of music. 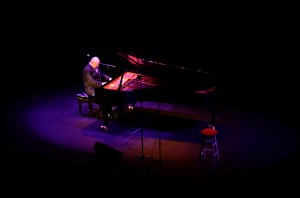 Tim O’Shields plays piano during a solo performance at the Imperial Theatre in Augusta, Ga. –Submitted

He began studying music when he was a preteen and continued throughout college. He loved music but was pushed toward chemistry as a more promising career.

O’Shields spent much of his chemistry career in management. He described himself as a “fixer” because he made sure things went smoothly. His position often meant flying upwards of 125,000 miles a year.

“My career had absorbed so much of my life,” O’Shields said. He found himself missing church due to his busy schedule.

During the last seven years in Colorado, he lived in a rural area of the state, at an elevation of 7,000 feet. O’Shields enjoyed the nature and even had a few fox friends who would greet him when he stepped outside. O’Shields said he enjoyed his job and the nature.

It wasn’t until the company was taken over that O’Shields found himself questioning what to do with his life. He was let go over the phone, leaving him with little idea of what to do.

O’Shields spent the next few years writing music, performing and producing a CD. He applied to The Recording Academy and was accepted as a member, allowing him to release his self-titled CD in 2011.

Still, O’Shields said he felt God driving him in a different direction.

He began applying for full-time music jobs at churches. 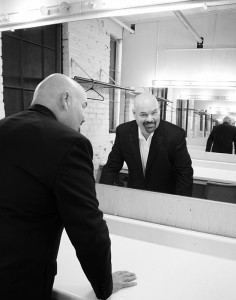 Backstage before a show, Tim O’Shields takes a moment to look in the mirror. O’Shields spent a few years performing and producing music before taking a job in Albert Lea. –Submitted

“I knew it would take a special church to look at my resume— with it being heavy on business with some music mixed in – and be willing to work with me,” O’Shields said. He found a posting online for the job at First Lutheran. When he was offered the job, O’Shields was asked if he could relocate in six to eight weeks.

“I am already on my way. I’m two states away,” O’Shields told them. He hopped in his car and was there that Sunday for the church service. He had no place to live, but said he was guided by the hand of God.

“I had taken calculated risks before, but this wasn’t even a risk,” O’Shields said.

O’Shields loves his job and said it was God who placed him where he needed to be and gave him the tools to suceed.

He enjoys playing the churches’ pipe organ, which he says is one of the biggest in the state. “When I play, you can hear it in Austin,” he joked.

O’Shields said the people of Albert Lea have been very kind.

“They have opened their homes and their hearts,” O’Shields said. “They have fed me. I think I have gained 10-15 pounds. I can barely button and zip my clothes.”

O’Shields said lutefisk is now part of his diet. He hasn’t adjusted to the Minnesota cold but said he enjoys that there is less snow than in Colorado.

“I feel like I have been here for a long time,” he said.