She received exceptional care from St. John’s Lutheran Community and Albert Lea Hospice. Her memorial service will be at the Albert Lea United Methodist Church at 11 a.m. Saturday with the Rev. Tom Biatek officiating. 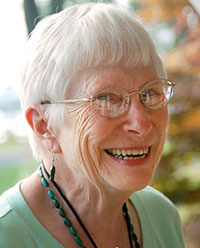 Marjorie Joyce Helmen was born in Milaca on Oct. 4, 1934, daughter of Ralph Helmen and Hattie Peterson Helmen. She grew up among 52 first cousins and graduated from Milaca High School. In 1955 she graduated from Methodist-Kahler School of Nursing in Rochester. She entered a nursing education program at the University of Minnesota Hospitals as a registered nurse, then worked at the Peter Bent Brigham Hospital in Boston and at Dartmouth/Mary Hitchcock Hospital in Hanover N.H.

She was married to Dr. Thoburn Thompson in Milaca on Jan. 2, 1960. They lived in New Hampshire until 1963 when they prepared for United Methodist missionary assignments as a nurse and a surgeon. After orientation at Stony Point, N.Y., and language training in San Jose, Costa Rica, they arrived in La Paz, Bolivia for service at Pfeiffer Memorial Hospital (aka Clinica Americana) and School of Nursing (Escuela Evangelica de Enfermeria). Marge was interim director of the nursing school and board member for one public school and another international school. Two of their four children were born in La Paz.

Albert Lea became home for the family from 1969. Marjorie loved community and church involvement and was immersed in United Methodist Women’s work, District 241 school board, League of Women Voters, Good Samaritan advisory board, Trades & Labor housing board, United Way allocations committee and other community organizations. She served on the refugee committee of the United Methodist Church’s Committee on Relief (UMCOR), for several years, traveling to South Asia, Central America and the Caribbean in that capacity.

A memorable 75th birthday party in 2010 brought together many persons who enriched her life, though Alzheimer’s disease affected her ability to remember each one.