Marlin Herman died Monday, Jan. 20, 2014, at the RenVilla Health Care facility following an extended illness. He was 93 years old and a member of what has often been called the “Great Generation.” A public visitation will be from 4 to 6 p.m. Friday at Dirks-Blem Funeral Home in Olivia. A private family funeral will be held and interment will be in the Olivia Cemetery. 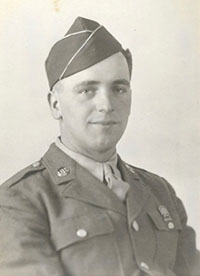 Marlin served in the U.S. Army, 75th Infantry, in World War II and fought in the Battle of the Bulge in Belgium.

He worked on the Pennsylvania Railroad for 11 years. He farmed and ran a chicken ranch before coming to Minnesota to manage Glendairy Farm in Glenville. He ended his working career as a loading dock foreman for Wilson & Co. meat packers in Albert Lea. He retired from Wilson & Co. after 25 years.