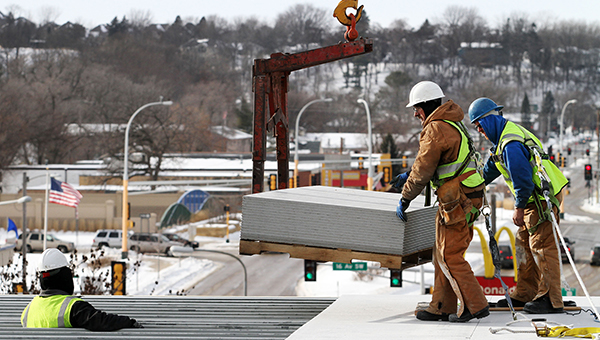 Construction workers Jack Sullivan and Jeremy Sommer, right, move slabs of concrete flooring towards Mausoon Hussain, bottom left, at the site of what will be a Homewood Suites hotel Friday in Rochester. The hotel will be across the street from Mayo Clinic Hospital, Saint Marys Campus, and is one of the first signs of Rochester’s growth since the state Legislature approved the Destination Medical Center initiative last year. — Alex Kolyer/for MPR News

ROCHESTER — On one of the coldest days of winter, construction workers Jack Sullivan and Jeremy Sommer used a crane to hoist a huge slab of concrete flooring for the fourth floor of a new Homewood Suites, an extended stay hotel, slated to open this summer.

The six-story, 108-room hotel across the street from Mayo Clinic Hospital, Saint Marys Campus, is one of the first signs of commercial development in Rochester since the Legislature approved the Destination Medical Center initiative last year.

As Mayo Clinic launches its 20-year, $5 billion investment plan to remake its flagship campus, the massive project is spurring waves of commercial development, particularly in the hospitality industry. With about 12,000 full-time employees in Rochester, the sector is second only to health care.

The inherent connection between the two industries has fueled interest in hotel construction, as developers and landowners look at opportunities for growth.

“Right now, if a particular owner or investor can find the right location, there’s definitely the need,” said Tony Rand, site supervisor for Weis Builders, the company working on the Homewood Suites project.

Rand, who has worked in Rochester for more than a decade, said the market now is as good as he’s ever seen it, especially for hotel development.

“With all the expansion Mayo is making, I don’t think you’re going to be able to say we have enough places to put guests to the city and people coming in to visit Mayo,” he said.

Rochester, which today has 5,500 hotel rooms, likely will have an additional 2,000 rooms and 18 new properties by 2016, estimated Brad Jones, executive director of the city’s Convention and Visitors Bureau. Seven have already been announced.

As a result, parts of Rochester are dotted with construction cranes that are raising the city’s profile. The new hotels will make Rochester more competitive with other Minnesota hospitality centers, among them Bloomington, which has 9,100 hotel rooms; Minneapolis 7,300; St. Paul 7,200; and Duluth 6,100, according to the December 2013 STR Report, which gathers hotel data for the Minnesota Lodging Association.

“What you’re seeing now is people are building assets, people that don’t have a footprint here now, or that do that want to expand that,” Jones said. “It’s kind of a race to own the asset first and get in the market.”

The average hotel occupancy rate in Rochester recently hit 70 percent, a key indicator of future growth. But Jones said some of the smaller hotels and motels that have been part of the Rochester landscape for decades may have a hard time surviving in the future.

“There’s going to be some older properties that are probably going to sell and redevelop or develop as something else,” he said. “And as a market, that’s probably a healthy thing. That’s competition and we live in a free market and that’s what happens.”

Corporate consolidation is evident in downtown Rochester, where the group that owns the historic Kahler Hotel also owns a package of Rochester properties that includes about 60 storefronts and five downtown hotels.

Last summer, the longtime owner of the Ray-Mar, one of Rochester’s iconic motels, sold the 27-room property to another group of local investors.

The Ray-Mar is near the new hotel that’s going up across the street from the Saint Marys campus.

While there are no plans to redevelop the property yet, front desk clerk Nicole Sullivan thinks it’s only a matter of time. She doesn’t think smaller, budget-friendly hotels will last.

“We’re literally half a block away from Saint Marys,” Sullivan said. “Kind of seems like within 20 years, this hotel might be a parking ramp with the way things are going. I believe there might be a place for them, but it wouldn’t be … in downtown Rochester. You’d have to go farther away in order to get something like this.”