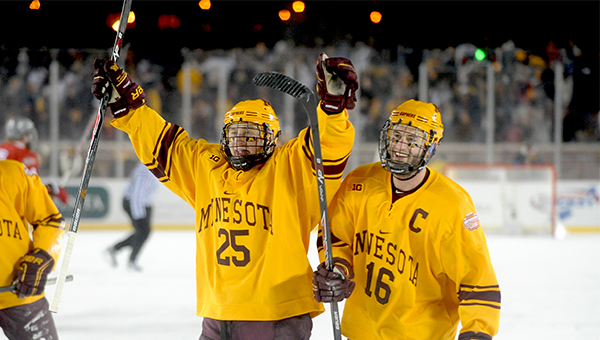 MINNEAPOLIS — Outdoor hockey is a staple for the development of most players who grew up in Minnesota, but Friday was the first time the state hosted a major outdoor game in decades.

The University of Minnesota men’s hockey team took down Ohio State 1-0 on Friday night after the Gophers women’s team defeated Minnesota State-Mankato 4-0 a few hours earlier on an outdoor sheet of ice at the Hockey City Classic. The games were played at TCF Bank Stadium. It was the first time that the U of M hosted an outdoor game in more than 80 years. 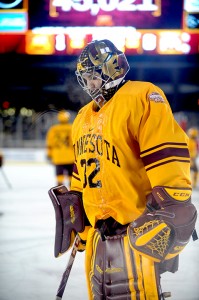 Adam Wilcox of Minnesota skates to the goal after a timeout Friday against Ohio State during the Hockey City Classic at TCF Bank Stadium in Minneapolis. — Micah Bader/Albert Lea Tribune

“It seemed like everyone had a good time,” Minnesota men’s coach Don Lucia said. “Ice conditions were really good, I think they only had to do one repair the whole game, so that was a lot different from last year’s event.”

Lucia and the Gophers were a part of the Hockey City Classic last year against Wisconsin at Soldier Field in Chicago, and the event had ice problems because of mild weather. Though the Gophers have played in outdoor games in consecutive seasons, he doesn’t expect it to become a trend.

“I think we’ll wait for a while. This is something where it’s special to be a part of it, but I think you can do it too much,” Lucia said. “Quite frankly, the next team that deserves to play in this game is the [Minnesota] Wild. I think that our fans would really embrace that and hopefully the NHL will come here.”

Temperatures were in the single digits on Friday night, but the players and coaches said that it didn’t affect them.

“I layered up,” Minnesota women’s head coach Brad Frost said. “The heated benches were nice. There wasn’t a lot of wind out there, which was great. The temperature was down, but without the wind it was comfortable for everybody.” 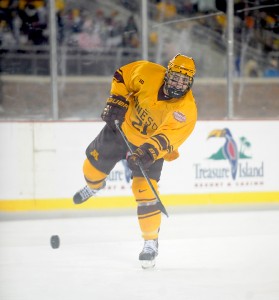 Connor Reilly of Minnesota takes a shot on goal in the third period Friday against Ohio State During the Hockey City Classic at TCF Bank Stadium in Minneapolis. — Micah Bader/Albert Lea Tribune

Taylor Cammarata scored the only goal in the men’s game by throwing a puck on net and having it land on the goal line before being swatted in by Ohio State’s keeper. Even though Minnesota and Ohio State feature very potent offenses, the outdoor ice slowed them down and forced both to use a more dump-and-chase offensive approach.

“Going through it last year, sometimes when you try to make too many passes it might bounce over a stick and the other team is going to go, so you might want to play a more cautious game,” Lucia said. “I think the goaltenders made a couple saves too, to keep it 1-0.”

Ohio State head coach and native Minnesotan, Steve Rohlik, said he was honored to lead his team in the game. When asked if he would like to possibly have an outdoor game at Ohio State’s Ohio Stadium, he said he would. 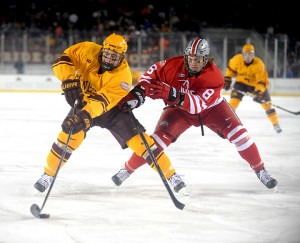 In the women’s game, the Gophers held the slight one-goal edge heading into the final minutes of the second period before Rachael Bona and Sarah Davis extended the lead to 3-0 in the second’s final two minutes.

“If it’s a one-goal game headed into the third period you still have a chance,” Minnesota State-Mankato head coach Eric Means said. “When they get a couple late, it makes the game much more difficult to come back and rally your players’ spirits too. I thought it definitely impacted the game.”

Players from both teams said the difference in venue was noticeable during the beginning of the game, but added that the aura of playing in a 50,000-seat football stadium wore off after the first couple shifts.

“Leading up to it, it was, ‘Oh my God, we’re going to play outside,’” Davis said. “A couple shifts in, it was just a regular game.”

The Gophers and Buckeyes moved back inside for their game on Saturday. Minnesota and Minnesota State-Mankato will conclude their series in Mankato today.