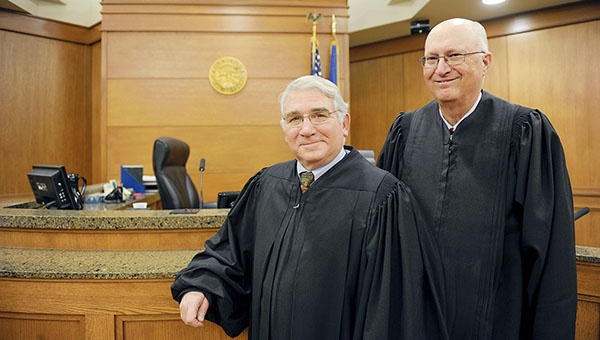 Mower County District Court judges Fred Wellman and Donald Rysavy have both spent several years on the bench in Mower County and both are retiring in the near future. Eric Johnson/Albert Lea Tribune

Most judges are appointed via the Minnesota Commission on Judicial Selection, a bipartisan commission that interviews and screens candidates before recommending three to five candidates to Gov. Mark Dayton, who makes the appointment.

It is possible the governor could allow the vacancies to be elected during the 2014 general election, according to Wellmann, but most anticipate the judges will be appointed.

“That seems to be a good process,” Wellmann said.

Rysavy also expects the judges will be appointed, and they would then be on the ballot in 2016.

Wellman is set to retire April 4. Rysavy retires May 2.

After their official retirements, Wellmann and Rysavy may not go far at first. Both intend to serve as senior judges during the transition period. Rysavy said he’s willing to meet with the new judges and offered his advice: Be yourself, and remember what it was like on the other side of the bench.

“There’s an awful lot to learn in a short period of time to be able to handle the load, and I’m certain we’ll get some very, very good people applying and appointed,” Rysavy said.

While most county and court workers have been through judge changes in the past, Sheriff Terese Amazi noted it will be different with the two leaving around the same time.

“We don’t know what to expect,” she said.

Just like the new judges, there will be a learning curve for most employees working with the court system, Amazi noted.