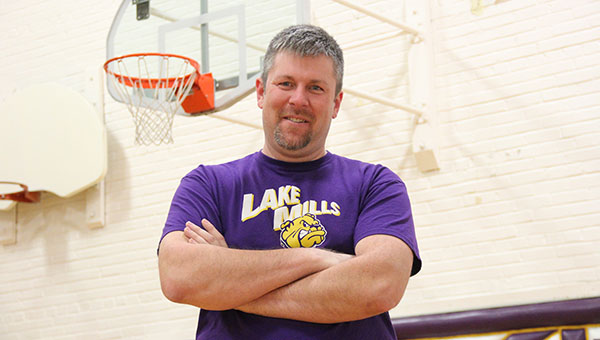 LAKE MILLS — A familiar face stepped on the court to take over the Lake Mills girls’ basketball program this season.

Thad Evans — a 1993 Lake Mills High School graduate — accepted the girls’ basketball head coaching position. It may be his first year leading a program at the varsity level, but he’s not a greenhorn.

For the last two years, Evans worked as a freshman and junior varsity coach at Lake Mills and was an assistant varsity coach under former Bulldogs girls’ basketball head coach Beth Van Roekel.

“When Beth stepped down to spend more time with her family, I was really interested in applying to fill the role,” Evans said.

Family is important to Evans. He and his wife, Christine, have two daughters, Mary and Becca. Both girls are in high school: Mary is a junior and Becca is a freshman. Both girls play basketball, and Evans has been coaching

them since they began playing in Iowa’s Amateur Athletic Union basketball program. He started coaching Mary’s AAU team when she was in sixth grade and then coached Becca’s AAU squad when she was in fourth grade.

Aside from coaching, Evans is a corn and soybean farmer.

“It’s strictly a grain farm,” he said. “1872 is when my family settled the ground here. It’s a long-term family farm.”

After Evans graduated from North Iowa Community College, he took over the farm, and it keeps him busy.

“Spending time with my family, coaching and farming take up every bit of time I have,” he said. “It’s time-consuming, but I really love it.”

“His passion and energy helped him step into the role that we needed,” Boehmer said. “It worked out well.”

In his high school days, Evans played forward and center for the Bulldogs basketball team. After his prep days were over, Boehmer could tell that he remained a student of the game.

“Even before he was doing anything with the staff, he’d come in and talk about what it takes to build a program,” Boehmer said. “He’d pick my brain and see how we operate. He’s trying to be a sponge to soak up as much as he can.”

The Bulldogs (1-7 overall) had a rough start to the season, but Mary has been putting up solid numbers. Her rebounding total (70) is third in the North Iowa Conference, and her scoring is in the conference’s top 10 with 8.8 points per game.

As a team, Lake Mills is third in the conference with 48.6 points per game.

Sarah Orban, a senior guard, leads the Bulldogs with 11.4 points per game, and she leads the conference with 19 3-pointers.

Evans said the offensive system he installed is completely different from when he took the court at Lake Mills.

“I’ve gone from being a post player to more of a perimeter coach,” he said. “The personnel dictates that we need to run more of a spread offense. The girls are picking it up fairly well.”

Late in the season, Evans hopes his team will peak. For now, he’s just trying to get past the steep learning curve.

“I think by the end of the season, our record will turn around and be a lot more respectable,” he said. “Our goal is to get to the end of the year and be ready for the tournament.”

Evans and the Bulldogs will be back in action at 6:15 p.m. today at West Hancock.