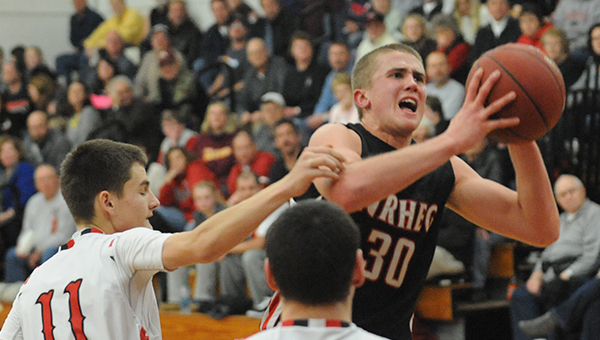 NEW RICHLAND — The No. 1-ranked girls’ team may get most of the glory, but the NRHEG boys’ basketball team has quietly become a solid squad this season. 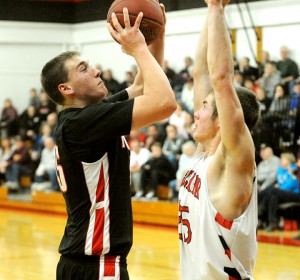 Head coach Pat Churchill said that he noticed a few differences in his team compared to the game film from last year’s matchup against St. Clair.

“We got off to a nice start this year. Last year we started all sophomores — so we knew it would be tough — and we got better. But we just didn’t get any wins,” Churchill said. “This year we got off to that nice start, and you could see the confidence level inside this team. Once you get that confidence, you believe in what you’re doing, and things seem to go a lot smoother.”

Churchill said his team also looks and plays a lot bigger this season.

“I was watching our tape against St. Clair last year and I couldn’t believe how skinny we looked,” he said. “Not that we’re big bodybuilders now or anything, but we’re more physical this year.”

After starting out the season 6-0, the Panthers have won five of their last seven contests.

“Offensively we’re really clicking, we have four guys that can put the ball in the hole,” Churchill said. “When you have that many guys that can score, it makes you tough to defend. And then on defense we’re a lot better than we were last year.”

St. Clair was able to stick around in the game on Monday, but the Panthers seemed to always hit a clutch 3-pointer when the Cyclones cut the lead to striking distance.

“That’s a pretty good ballclub in St. Clair, and they’ve got some pretty nice players,” Churchill said. “I thought offensively in the first half we got the ball inside and they had a little trouble with that.”

Trevor Tracy drilled six 3-pointers on Monday night. Kevin Kalis was a big presence in the paint with a double-double: 21 points and 11 rebounds. Spencer Tollefson led the Panthers with 30 points.

“After struggling a little bit in the first half, Trevor Tracy got it going in the second half to extend the lead,” Churchill said. “Tollefson played really well all the way, offense and defense.”

St. Clair played a half-court trap defense for most of the game. Churchill said he was impressed with how his guards handled the pressure.

“We handled it pretty well,” he said. “I don’t think they got any turnovers off that. So I thought that we handled the pressure great.”

Churchill added he’d like to see his team slow the game down when they have a lead, but he said it might come with time.

“We don’t do that very well right now,” Churchill said. “But we scored enough to build ourselves up a nice lead and held on to it.”

NRHEG will play its second game on back-to-back nights at 7:15 p.m. Tuesday at Waterville-Elysian-Morristown.