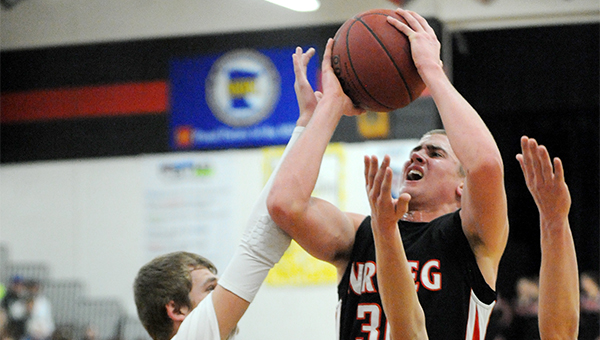 Both teams entered Saturday’s game with one loss. 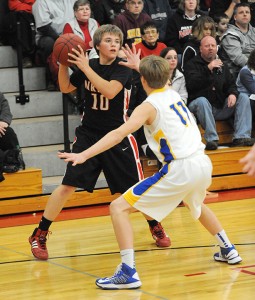 “They’ve had one of the best teams in our area for a number of years, and we’re kind of the new kids on the block this year,” said NRHEG head coach Pat Churchill.

Last year, the Panthers lost 80-39 to the Vikings on the road. But on Saturday, NRHEG gave Hayfield all it could handle before the Vikings squeaked out a 73-66 win.

In the first half, Hayfield hit six 3-pointers and built a 15-point lead, which was capped with a 3-pointer at the halftime buzzer. NRHEG kept the deficit manageable with consistent scoring from Spencer Tollefson, who tied Hayfield’s Cole Kruger with a game-high 12 points before halftime.

Most of Tollefson’s scoring was created by driving to the basket.

“The coaches want me to penetrate. If they don’t stop me, I’ll take it all the way,” Tollefson said. “Otherwise, I’ll kick it out to our shooters Trevor (Tracy) or Oakley (Baker), and they usually hit the shot.”

Early in the second half was the calm before the storm. Hayfield extended its lead to 22 points — its largest lead of the night.

However, NRHEG fought back with a furious rally. After scoring five points in the first half, Oakley Baker scored 16 in the second to fuel a run by the Panthers that cut their deficit to seven points.

“Coach called a timeout and said to relax and that we could play with these guys,” Tollefson said.

With a pair of free throws by Tollefson, NRHEG trailed by five points with more than five minutes left.

The Panthers couldn’t make up any more ground in the final minutes. Hayfield ended the game on a 12-10 run by minimizing turnovers.

“I was disappointed we lost, but I’m really proud of our kids — how we fought our way back into the game,” Churchill said. “We just spotted them too big of a lead.”

Baker and Kruger tied with a game-high 21 points. Tollefson scored 19 points and had five assists, and Kevin Kalis led NRHEG on the glass with seven boards. He also scored 14 points.

Hayfield (12-1 overall, 7-0 Hiawatha Valley Conference) was in the same section as NRHEG last year. However, the Vikings moved to Section 1AA this year and the Panthers stayed in Section 2AA.

NRHEG (9-2 overall, 4-0 Gopher Conference) will play next at 7:30 p.m. Tuesday at Blue Earth. The Buccaneers offense runs through post Luke Monson. At the Blue Earth tournament on Dec. 28, Monson scored 18 of the Buccaneers’ 23 first-half points against United South Central.

“We haven’t beaten them in seven years, so we need to come out and be ready to play,” Churchill said. “They’re going to be physical like Hayfield.”