Propane market out of control

For many rural, Midwest homeowners, the sound of that rumbling propane tanker in the driveway or the sight of an invoice hanging from the door is reason to cringe. It’s only getting worse, too. Even the retailer is cringing. 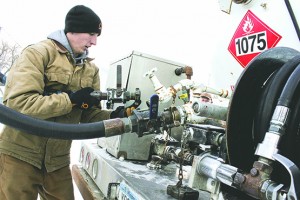 Matt Kaster fills a tanker with propane at the Dexter Elevator in Dexter Wednesday evening. Propane has skyrocketed recently and hit $5.09 per gallon on Friday. –Matt Peterson/Albert Lea Tribune

“My phone rings off the hook with customers,” said Randy Stephenson, manager of Dexter Elevator in Dexter.

As frigid temperatures crept into the Midwest in the past few weeks, of course, the propane consumption increased when homeowners cranked up their thermostats. But the cold snap never broke. Furthermore, suppliers are struggling to bring more of the liquid into the region.

The shortage of propane in the Midwest has driven prices to astonishing record highs, and the price keeps climbing. A week ago, as the price neared $2 per gallon, there was cause for concern. However, when the price went well above $2, it was higher than some had ever seen.

“I was at $2.54 this morning, which is an ungodly price,” Stephenson said on Tuesday afternoon.

Of course, many retailers are caught in the mix. Ferrelgas delivers to many residents around Austin; however, a representative with the corporate office did not return phone calls last week. Central Valley Cooperative, which delivers from Blooming Prairie, also serves many area residents. A representative from the Northfield headquarters quickly declined comment, as well.

Rural propane consumers have been utterly surprised when opening their bills in the past few weeks. Some of them, like Jan and John Ulland of northern Austin, can at least be happy they got propane when they did.

“The last time we wrote a check, it was quite a bit bigger,” John said.

The Ullands, who have a larger home that requires more energy, received 342 gallons on Jan. 7. Even at that point, they were surprised. John looked over his bill again last week.

Had the Ullands needed propane this week, they would’ve paid more than double that amount.

Not far from the Ullands, rural Austin residents Snow and Lance Pogones noticed the price spike as well. Snow could tell the rate was going to be high as soon as she greeted the delivery man at the door.

“He came to the door and just apologized,” Snow said.

Lance reviewed the bill later and saw it was much higher than his last bill, from about $1.40 per gallon to $2.20.

Even that is about the highest rate he remembers paying.

For others, including farmers and some who contracted for large quantities of propane, the price increase has not been an issue. If they can make their current supplies stretch throughout the cold snap, they will be OK. That’s the case for Lois and Arvid Jovaag, south of Austin. Furthermore, the Jovaags — conservationists and sustainable farmers — are already conscious of their energy use. They try to keep their house well-sealed, close off specific rooms and use a wood stove. But they haven’t ignored the issue, and one can bet the Jovaags are watching their propane usage closely.

Of course, there are others who had contracted for large quantities but recently ran out and are now in a pinch. They’ll be forced to pay plenty — for what they can get.

Hurry up and wait

Across the region, truckers have lined up to get propane from large-scale suppliers, suppliers that are only letting go of so much product. Local retailers have kept a keen eye out for anywhere to get propane. Stephenson has been on the phone with his suppliers in the past two weeks, but wondering where and when the next available load will be. Dexter Elevator typically gets more propane every business day. Lately, that has been far from the case.

“Most days, I haven’t been able to get any gas,” Stephenson said.

Some suppliers have purposely priced themselves out of the market to hold onto their reserves. Stephenson received an email last week, which made that perfectly clear.

“Instead of just saying, ‘I’ve got no gas; I can’t sell you any gas,’ they just emailed their price out at $99.99 a gallon,” Stephenson said. “I thought that was funny. They probably thought it was funny, too.”

It was only funny for the moment; the situation is worsening. The tough part for men like Stephenson and his fellow employees is breaking the news to customers.

“Every time I go in to get a load, I don’t know what I’m paying for it until the day I get it,” he said. “So it really creates havoc with what I have to charge my customers.”

A lot of residents have called Stephenson after viewing their bills. They’re still calling with each delivery.

Matt Kaster and Steve Jones, who deliver propane for Dexter Elevator, hear about the stress from customers. While many customers aren’t home when deliverers fill tanks, those who are home show surprise. Still, those customers don’t have much for options. It’s either get propane, or freeze.

“I was to to a place today, and it was just double what she expected,” Jones said on Wednesday. “Like she said, ‘I have to pay it.’”

Stephenson, the delivery men, customers and others wish the government would have done something to prevent this situation.

More factors than cold weather have played a role in the price increases. The Cochin Pipeline carrying propane to the area had been shut down for repairs for about a month from November to December. But the elephant in the room: Is it price gouging? To Stephenson, that is clear. Others are cautious about saying that, including Roger Leider, executive director of the Minnesota Propane Association. Still, he has never seen such a dire situation.

“It’s unfortunate,” he said. “I’ve never seen it this high. It’s totally new to me.”

The MPA and other state agencies around the region are in discussions, but say help needs to come from the federal level.

“I think the price jump will attract more attention at the Department of Energy,” he said.

After some unpleasant conversations with customers, Stephenson has urged consumers to push their local legislators for help. Some have done that, and on Friday, Sen. Dan Sparks, DFL-Austin, issued a response. He said he is aware of the situation and has been speaking with Gov. Mark Dayton and others about the crisis.

“I have heard from a number of constituents that are worried about the current prices and where they may jump to in the future,” Sparks said in his press release. “I have been in discussion with the governor and other invested parties that should be involved in this conversation. With session set to convene in a few weeks, I am hopeful that we can find some relief for these families.”

Some people won’t be able to wait a few weeks for a legislative session. That’s where Semcac comes in. The organization provides utilities assistance and is trying to keep pace with the influx of phone calls and inquiries.

“We’ve had an increase in phone calls for oil and LP assistance, but some of them are from people that we’ve already assisted,” said Susan Thompsan, energy assistance program coordinator at Semcac’s Rushford headquarters. “Actually, for us, it basically started this week. I would say probably 80 percent of our calls are LP calls. Consumers are very concerned about running low, paying bills.”

Current state regulations allow people who are at 50 percent or less of the state’s median income to qualify for energy assistance through Semcac. An individual who made $5,673 or less in the past three months would qualify. For a two-person household, the cutoff is $7,419 in three months; three-person, $9,164.

Beyond that, some of those same people who qualify have been eligible for a $500 crisis payment.

If they have fallen further behind on their payments or run out of propane, Semcac would pay the propane retailer to alleviate the issue. More help is on the way, too. Thompson said that $500 safety net will increase to $1,000 sometime next week, when all the legalities are ironed out.

Without major solutions in place, the only thing some people can do is conserve. Semcac and MPA officials urge that.

“In this situation right now, we need to encourage conservation, try to make what product we do have go as far as we possibly can,” the MPA’s Leider said.

People are already taking those steps, including retailers.

While each local propane retailer may have its own set of principles, such as filling tanks all the way every time, or requiring cash on delivery during this hardship, Stephenson is doing what he can to work with customers.

“I don’t want to stick them with a full tank of gas,” he said. “It would take them to the end of summer to pay for it.”

Because the price is so high, Dexter Elevator started filling its customers’ tanks to only 60 percent.

On Friday, he let his drivers use discretion, but encouraged them to be conservative. Leider said other retailers have been using that tactic as a last resort. Regardless, people like Stephenson are going to get plenty of phone calls.

“When they see the tag hanging there, they’re going to call and say, ‘What the hell is going on here?’” he said.

The 40 to 50 percent fills should be enough to get people by, partially ease the expense and ensure there will be enough propane to go around for awhile. As expected with any crisis, rumors fly. But after another conversation about the situation on Friday, Stephenson heard the price of propane may not fall below $3 until the end of February. Nobody has been able to accurately predict the wild fluctuations in the market.

For homeowners, the only certainty is how far their thermostats will turn left.