The title for this column comes from a book illustrated and written by Mary Engelbreit and given to me by my beloved friend Peggy who died several years ago from ovarian cancer. The dictionary defines the word kindred as: adj. – of a like nature or character. You see, Peggy and I were “kindred spirits.” It was a chance meeting through a Victorian magazine that we both subscribed to many years ago where they had a column for people who were interested in obtaining pen pals to correspond with. Now who writes letters in longhand with emails, texting or posting on Facebook, Twitter or other social media where you express your thoughts to everyone? 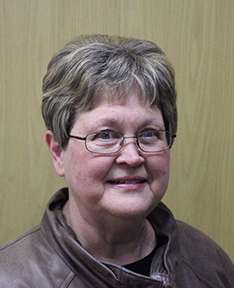 My life was rather quiet then as our daughter was graduated and gone, and I had just begun gardening with a small fire of passion and no one to share it with. I sent in my short paragraph expressing the type of person I would like to exchange letters with and had about 20 responses of people who shared some of the same interests I had. I narrowed the field down to 10 and wrote letters to them and several dropped out in the first year or so. Eventually two of them passed away, and the others I kept writing to for quite a few years. Peggy and I shared so many of the same loves in life and her passion for gardening and nature equaled mine and thus a wonderful friendship evolved.

When Peggy wrote letters they would be about 20 pages long and likewise when I answered back mine would be equally as long. She would tell me about what was blooming in her gardens in Louisville, Ky., and with the differences in our climates she would have flowers blooming much earlier than I did. How envious I would be when she would describe the crape myrtle blooming along her back fence which butted up to the high school grounds where they could enjoy the band practicing every morning and the football games in the evenings. I could just envision those beautiful crape myrtles covered in coral pink blooms and the magnolias with their lovely fragrance.

Like me, Peggy loved poetry and quotes and our letters would be filled with both of these and how often we both would remark of loving the same quotes; two peas in a pod my husband would remark. We would be out shopping, and I would stand looking at some small item and John would nudge me and say, “You’re thinking about that for Peggy aren’t you?” If I liked it so did Peggy and we both loved old-fashioned roses with a passion, but she could grow them in her zone while only a few David Austin roses would survive in my Zone 4 gardens. 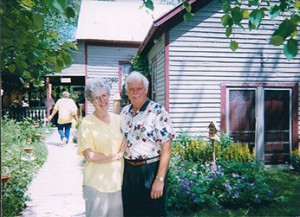 In this book Peggy sent me with Mary Engelbreit illustrations is a quote that must certainly have been written about the two of us: “She who loves a garden loves the wonders of creation and appreciates the joy that flowers bring.” When Peggy would tell me about sitting on her porch in the morning with her cup of coffee before she headed off to work watching the antics of the chipmunks sneaking closer and stealing the peanuts she had left in a trail for them from the garage to her porch I can just envision myself doing exactly that.

Her love of gardening was lovingly expressed in every letter that she wrote, which was about every 10 days or so filled with descriptions of what was blooming and the fragrances of everything in such detail that I could see the flowers and smell the fragrances; it was as if I was there sitting on the porch with her.

In 2001 during our vacation to visit Peggy and Charlie in late September the fall magnolias were blooming and they were gorgeous; I didn’t even know there were magnolias that bloomed in the fall. They took us on a tour of old Louisville where the gardens were in the front of the houses that were spaced close together with a sidewalk running between the houses but not a street which was in the front with a boulevard down the center dividing the streets. The gardens were wonderful and each one was different as were the stately Victorian homes with their Southern charm, not like our ranch style homes here in Minnesota and Iowa. Large trees shaded most of the gardens and magnolias were everywhere your eyes looked. You could walk from block to block without crossing the street but in the boulevards dividing the streets stood tall fountains with water cascading over the edges and dribbling down the sides. Boxwood hedges neatly clipped bordered each fountain.

Next we went to see the gardens at Churchill Downs where the Kentucky Derby is run in early May. This time of the years the gardens were filled with colorful mums and it was quite a spectacle to behold indeed. I wonder how many mums they had planted to make this vision of a sea of bright fall colors. I can only imagine how beautiful the gardens must be with spring flowers planted for Derby week.

Traveling through the state with its rolling hills of blue-green grass, white split-rail fences and horses grazing in the pastures made me fall in love with Kentucky. In every letter that Peggy wrote you could feel her love of Kentucky and the laid-back lifestyle and southern charm it has. Peggy taught me to really love my gardens and not to worry about what others said about them or our passion for gardening and for this I am deeply grateful. RIP my kindred spirit.

“Silently one by one in the infinite meadows of heaven blossomed the lovely stars, the forget-me-nots of angels.” — Longfellow

Carol Hegel Lang is an Albert Lea resident and local green thumb. Her email is carollang@charter.net.