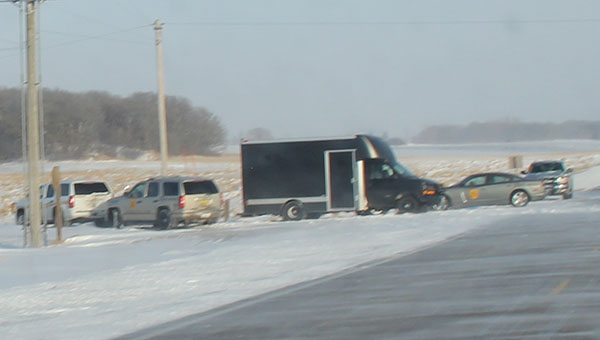 A SWAT van sits at the junction of Apple Avenue and Highway 105 east of Lake Mills on Thursday.

LAKE MILLS — A standoff began east of Lake Mills with shots reportedly fired. It lasted 4 1/2 hours Thursday and ended with a man being flown to a Mason City hospital with apparent self-inflicted wounds.

Authorities identified the man as Matthew Davis, 21, of 4573 Apple Ave., a rural Lake Mills residence just barely on the Worth County side of the line with Winnebago County. It is where the standoff took place.

He faces charges of attempted murder, a felony punishable by 25 years in prison. 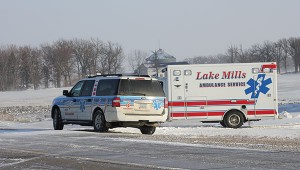 Two law officers responded. As they approached the house, Davis reportedly shot at them. The officers returned fire and took cover, calling for backup.

A SWAT team and law enforcement from Iowa State Patrol, Lake Mills Police Department and Winnebago County Sheriff’s Office responded. No more shots were fired during the next 4 1/2 hours. Davis eventually walked out of the home voluntarily, was taken into custody and transported to Mercy Medical Center in Mason City.

Many of the authorities set up at the junction of Apple Avenue and Highway 105, right on the county line. Davis, a renter, was in his home up Apple Avenue a quarter mile. The two-story home was built in 1978 with 2,000 square feet of living space. It sits on a 35-acre parcel with woods.