South Sudanese gather to pray for end to civil war 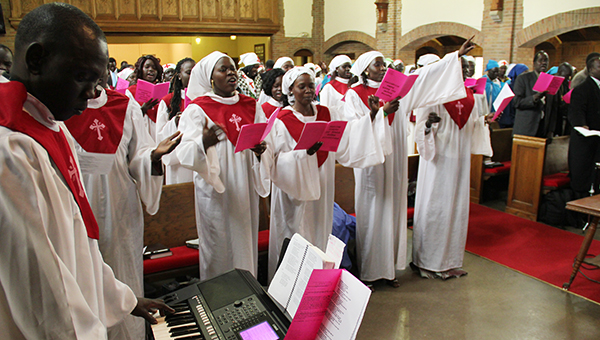 South Sudanese Christians from across the Midwest gathered Saturday at First Presbyterian Church in Albert Lea as violence continues to tear apart their homeland.

“The South Sudanese church prays for those who are innocent and dying that God will save them,” said the Rev. James Rut, head of the Nuer Christian Mission Network of North America.

South Sudan, which became an independent state in July 2011 and is the world’s newest country, has been divided by a civil war since fighting broke out last month. President Salva Kiir claimed it was a coup attempt but political opponents say it was a power grab, as Kiir had been consolidating power, dismissing his cabinet and Vice President Riek Machar, who has been in hiding. 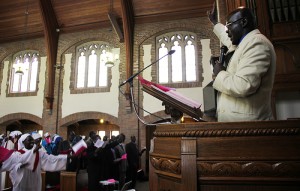 Kiir, who was elected in 2010 and took office in 2011, fired Vice President Riek Machar in July after it was discovered Machar had interest in running for president in the 2015 elections. Kiir is a member of the Dinka tribe, which is found across a large swath of Africa, but he is from the Dinkas inhabiting the Bahr el Ghazal region of South Sudan. The South Sudanese call his tribe Dinka Bahr el Ghazal. They say Dinka people from other areas of the country are not aligned with the Dinka Bahr el Ghazal.

And Nuer people say the military went door to door killing Nuer families and raiding their homes. Others were captured in the countryside and killed. At least 1,000 people have been reported to be killed and 800 injured, according to media reports. The Ugandan military has joined the South Sudanese government in fighting Nuer militia.

The South Sudanese gathering in Albert Lea mainly were from the Nuer tribe, who occupy the east central area of South Sudan along the White Nile River and toward the border with Ethopia. Machar hails from the Nuer people.

“What happened in our country? Only the president can answer,” said Peter Khor Malual of La Vista, Neb.

About 125 were there in the morning when the Tribune visited. Rut said wintry weather kept more from arriving until the afternoon. The populations of South Sudanese were traveling from Albert Lea, Austin, Twin Cities, Rochester, Des Moines, Omaha, Sioux Falls, S.D., and parts of North Dakota.

Malual, a U.S. citizen, described his escape from Juba, the capital city, when fighting broke out Dec. 14.

He said he heard gunshots from the presidential guard in Juba and said it seemed the incident was within the military alone. Nevertheless, they hid under the beds. There was more fighting the next morning, and that evening a curfew was issued.

“It turned out the government began targeting Nuer ethnicity regardless of status,” he said.

He was arrested on Dec. 17 and taken to a compound. Missionary James Tang of the Evangelical Covenant Church learned of Malual’s detention and called the U.S. State Department.

Malual said because the detention was baseless they took him to the head of security, a man who was Nuer, and he was able to get him on an evacuation flight for U.S. citizens out of Juba on Dec. 18. 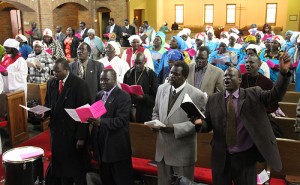 Malual said he, like many others, wants to return to fight. Many friends have died, he said.

“What happened within the government itself has spilled over into the people,” he said.

He said the country could end up a failed state like Somalia or it could be a productive one if the global community steps in to put it back on track. He also contended that chemical weapons have been used, phosphoric acid, to be specific.

Thomas Doap of Bellevue, Neb., said he was near the barracks where the war started. Many Nuer fled the city while being shot at by the military. He was among people living in the bush. They would attempt returns every morning but would face gunfire.

By Dec. 18, Doap decided to take a group of people he was hiding with toward a U.N. compound. On the way, Dinka soldiers surrounded them, made them sit and hand over valuables, even the shirts on their backs. They feared for their lives but delayed as much as they could. A federal unit of mixed ethnicities pulled up and a major condemned the Dinka soldiers for what they did, making them give back the valuables and set them free.

Close to the U.N. compound, they encountered a military checkpoint and again were made to sit. Doap told the others to run to the compound, for if the soldiers had to shoot, they would be firing at U.N. troops.

He was able to get to the airport and was evacuated as a U.S. citizen, but first he got word that his house had been been looted. He hoped international forces can depose Kiir and take him to the International Criminal Court.

“A criminal can be elected,” Doap said.

Nyigeelo Ochan Gon of Rochester was not a Nuer member. He was from another tribal minority in South Sudan, the Anyuak.

Many minorities in the country, he said, won’t oppose the Dinka-controlled government because of the fear of the same killing of their people like what’s happening with the Nuer.

Tut Dieng of Des Moines said he is bothered by the lack of action of the international community. Uganda has sent forces to assist the government in killing its citizens, and the Nuer are fighting back because they are left with no choice.

He said the United States was key in helping South Sudan gain its independence, but it was too bad the country decided to sell its oil to China instead of the United States. China, he said, had sided with Khartoum, the capital of Sudan, in the decades-long Second Sudanese Civil War.

Tang, the missionary, is from the Twin Cities suburb of Columbia Heights. He said as taxpayers in the United States they intend to exercise their right to free speech to urge the country to take action to prevent genocide like what happened in Rwanda in 1994.

A former leader of the Nuer community in the United States, Brown Both Bol of Austin, was there, too. He said the U.S. citizens are calling on America to resolve the situation before it grows worse.

He showed a piece of paper with a story telling how U.S. and other countries have sought to resolve the conflict through diplomatic means.

In addition to meetings, the South Sudanese on Saturday sang in the sanctuary of the First Presbyterian Church, much louder and clearer and with morning enthusiasm than a typical Sunday morning congregation. They also prayed and fasted for the situation in South Sudan.