A wall at Southwest Middle School will be repaired this summer.

“It is more of a preventative maintenance,” said Steve Anderson, who is director of facilities for the district. “There is no leaking or anything like that.”

The wall is made of brick laid when the school was built in 1957, he said, and it is crumbling because of wear and tear. It is the southwest wall of the gymnasium. 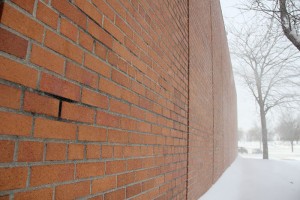 A wall will be repaired at Southwest Middle School this summer. –Tiffany Krupke/Albert Lea Tribune

The Albert Lea school board voted during a December meeting to approve the repair bid of $124,384 from The Joseph Co. of Austin.

Anderson said the wall will be repaired using tuck-pointing, which will replace the mortar between the bricks. Some bricks will be replaced.

Other exterior walls will be repaired using caulking. The process will take six to eight weeks.

Anderson said the repair will help the school avoid high-cost repairs later, which could include replacing the entire wall.

The district is updating Southwest Middle’s heating ventilation and air conditioning unit. The $4 million project will help improve the air quality in the building.

Hot water pipes and duct-work has been hung, but the project won’t be complete until Aug. 15.