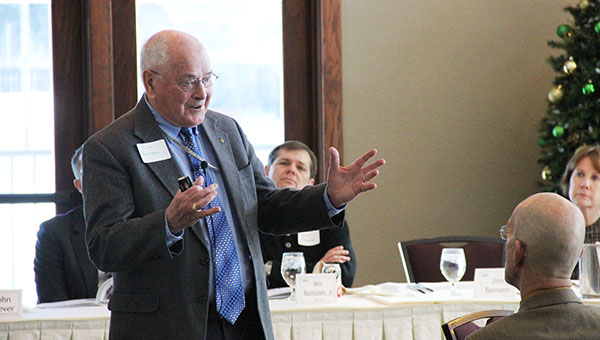 That was the message Wednesday of the former president of Bemidji State University at the Greater Jobs Inc. annual luncheon at Wedgewood Cove Golf Club.

Jim Benson quoted several business, church and motivational authors in his speech about changing the direction of an organization, a workplace or even an entire community. One of them was evangelical speaker Charles Swindoll, who said: “The only thing we can do is play on the one string we have, and that is our attitude. I am convinced that life is 10 percent what happens to me and 90 percent how I react to it.”

As the retired president, Benson works with the university as a volunteer. He is part of an effort called Bemidji Leads!, which focuses on stewarding the community. Its slogan is “Building a future of promise for our community.”

The group worked to alter the identity of Bemidji and provide it with vision and direction. The effort gained attention nationwide, with other cities wanting to duplicate its efforts. Benson’s speech on Wednesday, however, focused less on Bemidji and more on how an organization needs vision to grow.

He asked the audience if they knew that America “lost half of the Fortune 500 companies in the 1980s” because they had no vision. He noted that they were operating on what they had done before, rather than drawing up visions of where they needed to go.

He said a vision needs to be clearly understood, widely shared and overwhelmingly compelling.

“It’s all about aspiration,” Benson said.

Developing a vision involves finding out what an organization is best at and passionate about, he said.

Vision is but one aspect among three needed. The first, he said, is mission — the core reason for being. The other is mystique, how others view the organization. It includes branding and community involvement.

Benson said the pace of change happens more rapidly than ever before.

He noted his grandfather was a settler who cleared woods in the 1800s to be able to farm. Benson said, on the other hand, his grandson went to college to be a digital game designer. He said his grandfather’s mode of work has more in common with the muscle-power thinking of the pharaohs than his grandson’s digital approach.

“Wow! What an exciting time to be alive,” Benson said. Exclamations were common in his presentation.

He said the traditional workplace was top down. He brought up the notion of the servant leader in the modern workplace, where responsibilities are the same but workers have greater authority to make their own decisions than ever, thanks to proper training and clear company vision.

He cited a quotation attributed to many great men over the years: “I must hurry for there they go, and I am their leader.”

He said if this isn’t the feeling leaders have in a workplace to some degree, then that workplace lacks vision.

Benson described how knowledge is growing exponentially. He said humankind knowledge could be stored in 5 exabytes in 2002. By 2011, it would require 1,800 exabytes, a measurement of digital stores equal to a billion gigabytes.

“If the economy is built on ideas, there has never been a better time than right now,” Benson said.

He brought it around by tying his points on vision, mission and mystique to attitude, saying all things considered, there isn’t much in difference between many people but “the little difference is a big difference. That difference is attitude.”

He said attitude often is more important than facts. Attitude will get people through any situation, like when there is light at the end of the tunnel and someone adds more tunnel. He said attitude and, in turn, willingness to change were factors in Bemidji’s transformation.

Its director is Ryan Nolander and the president for the past year was Nancy Skophammer of Farmers State Bank.

Together, they highlighted activities over the past year. Greater Jobs:

• Loaned to the new business You Are Beautiful & More from the Business Plan Recognition Program.

• Responded to new business leads from the Minnesota Department of Employment and Economic Development.

• Worked closely with city officials on a suitable location for market-rate housing and uses for the Freeborn National Bank building.

• The Department of Veterans Affairs announced it would locate a community-based outpatient clinic in Albert Lea in the former Jo-Ann Fabric & Craft store at Skyline Plaza.

Nolander mentioned that he and Albert Lea-Freeborn County Chamber of Commerce Executive Director Randy Kehr began what’s called the Business Retention and Expansion program, “where each month we meet with three or four local businesses to discuss the challenges and opportunities facing our local companies.”