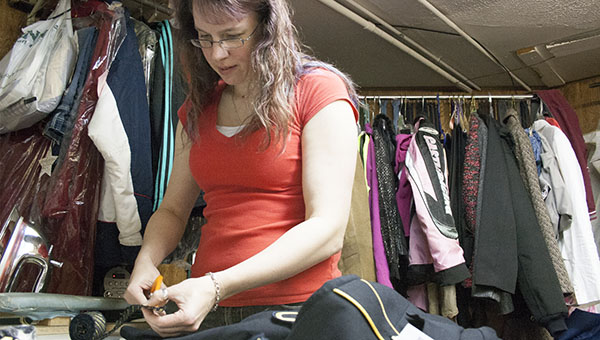 An Albert Lea woman is using her skill with a needle to benefit soldiers.

Adele Helleksen, owner of Albert Lea Tailors, was awarded a government contract to alter a new set of uniforms for soldiers in the Mason City unit of the Iowa National Guard. The soldiers are part of the 1133rd Transportation Company. 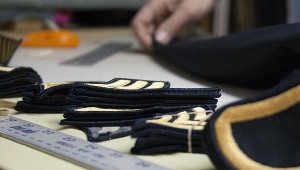 Patches sit on a table at Albert Lea Tailors Tuesday afternoon that will be sewn onto uniforms for Iowa National Guard soldiers in Mason City. — Sarah Stultz/Albert Lea Tribune

“It’s an honor,” Helleksen said. “It’s my tiny little thing I can do to help them out.”

Helleksen, who has owned Albert Lea Tailors since January 2004, said the award came about after she received a call in August from a state official who asked if she was interested in bidding for alterations to the Mason City uniforms.

After putting together a list of costs for everything she would need to complete, the tailor was asked to fill out a background check online.

After passing and filling out additional paperwork, she found out a month later she was awarded the Mason City contract. Around the same time, she received a call about doing uniforms in Iowa City, but ultimately that contract went to a different tailor.

Helleksen said in November she drove down to Mason City and met with all of the soldiers, fitted their new uniforms and figured out what patches they should have.

She ended up altering uniforms for about one-third of the soldiers in the unit, while the remaining soldiers oversaw their own improvements. 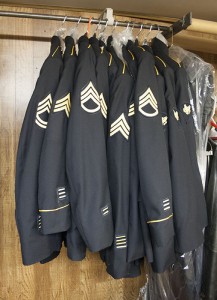 Some needed their pants hemmed; others needed their waists adjusted, she said. She is attaching new patches for them all. The patches show rank, overseas bars and service stripes.

Helleksen said the experience has helped her learn more about the military, particularly what the patches mean. The size of patches are different for men and women.

She hopes to be finished with the uniforms in the next two weeks.

This is not Helleksen’s first time helping soldiers with their uniforms. Though it is her first formal contract, she said she has also gone to the Albert Lea National Guard Armory once a year to update the uniforms for the soldiers here before an annual inspection.

Albert Lea Tailors can be found in the basement of Celebrations Party & Gifts, 122 S. Broadway. Helleksen said it has been in that location for at least 30 years.