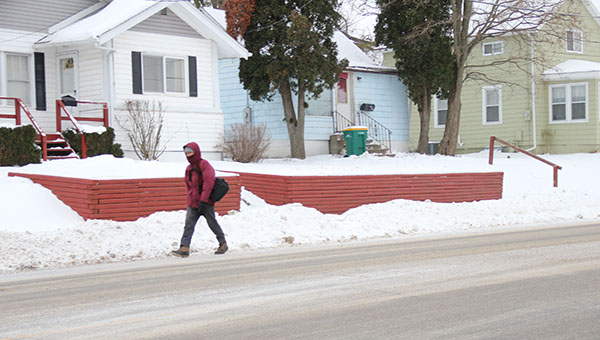 A woman is all bundled up as she walks down West Front Street on Saturday morning. — Tiffany Krupke/Albert Lea Tribune

It has been since 1996 since Albert Lea experienced weather this cold, and a record could be broken during the present deep freeze.

Cloud cover has the function of keeping warm air from escaping, even during cold spells, and KIMT meteorologist Adam Frederick said Albert Lea should have just enough cloud cover Sunday night to prevent the air temperature from breaking the all-time low.

The mercury is expected to dip to 27 below tonight and 21 below Monday night. The cold blast is expected to let up Tuesday, with a low that night of 10 below.

“If you don’t have to be outdoors, don’t go,” Frederick said.

The records that could be broken today and Monday are the high temperatures. According to records shared by the National Oceanic and Atmospheric Administration, the lowest high temperature in Albert Lea for Jan. 5 is 14 below and for Jan. 6 is 16 below. The online records don’t indicate what years those occurred.

The high for today is forecast to be 9 below, but the high for Monday — according to Frederick — is 16 below. The National Weather Service forecasts 19 below for Albert Lea. Meteorologists often track weather using varying models, which produces slightly different forecasts.

The cold blast settled in Saturday night. It comes on the heels of a blast of cold air that pushed through the Upper Midwest on Thursday. Frederick said having a second blast is what made already cold air even colder and pushed away gains in warmth from being above zero on Friday and Saturday.

He said the two Alberta clippers are low pressure systems that suck in cold air from central and northeast Canada. The clippers are able to do that in part because of a southerly jet stream.

The National Weather Service says the coldest weather arrives Monday morning. Minn. Gov. Mark Dayton announced Friday that public schools statewide will be closed. It was the first time in 17 years that a governor closed the schools. Private schools and Head Start classes in the Albert Lea area have followed suit. Some churches canceled Sunday school classes and worship services, too.

In Iowa, many school districts canceled classes in advance, including Lake Mills and Northwood-Kensett.

“We want people to be smart when they are out about whether they need to go outdoors,” said spokeswoman Jennifer Levisen.

Minnesota, Iowa, Wisconsin, North and South Dakota and eastern Montana are in a wind chill warning. In most places, including Minnesota, the warning expires at noon Tuesday.

Patchy and blowing snow is expected today after noon, with a blustery northwest wind of 15 to 20 mph. Wind chill values could dip as low as 40 below, according to the weather service.

When wind chill values are that low, frostbite is possible. Exposed flesh can freeze in 10 minutes. The weather service advises people to stay indoors and avoid unnecessary travel.

“A wind chill warning means the combination of very cold air and strong winds will create dangerously low wind chill values. This will result in frostbite and lead to hypothermia or death if precautions are not taken,” it states.

Blowing snow is expected for Monday, too, with a west northwest wind of 10 to 15 mph, with gusts as high as 25 mph.

On Saturday, the Minnesota Department of Transportation listed the roads in the Albert Lea area as “fair,” which is one step worse than the status of “good.” Still, it says motorists can expect icy patches. However, it listed the roads from Alden westward as “difficult.”

“Look out for ice on the roadway. Expect blowing snow,” the highway department says.