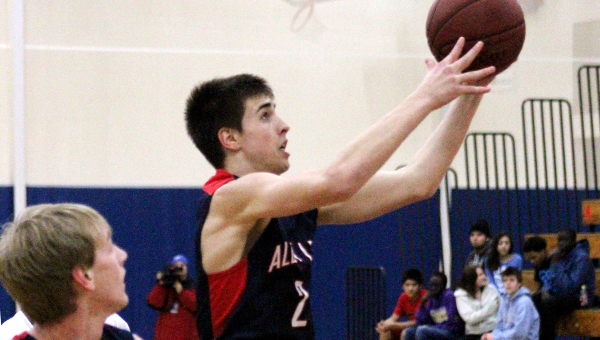 Albert Lea took a 1-0 lead Tuesday against Mankato East but trailed the rest of the game until 23.9 seconds remained in regulation.

The Tigers deficit fluctuated from three to 13 points, but they showed perseverance to win 58-57.

“I liked our demeanor,” said Albert Lea head coach Lucas Kreuscher. “The whole time we were trailing, the guys were like, ‘We’re fine. We’re alright. Just keep chipping away.’”

The Tigers whittled the Cougars lead down to three points with 10 minutes left in the second half. However, Mankato East responded with an 8-3 run to boost its lead to eight points.

Albert Lea hadn’t run out of gas yet and cut its deficit again. With 3 minutes and 10 seconds left, the Tigers were within three points, 57-54.

The score stayed the same until Jakob Kilby buried a 3-pointer with 23.9 seconds left to tie the game for the first time since the opening tip.

On Mankato East’s ensuing possession, Kilby stole the ball near midcourt, drove to the hoop and was fouled. He awaited two free throws.

He missed the first. After a timeout, he drilled the second.

“I spent a lot of time working on my free throws this summer and in the offseason,” Kilby said. “I was pretty confident it was going down.”

However, the game wasn’t over yet. The Cougars had a few more chances to win at the other end, but their first two shots rimmed out and Tesloch Kuey sealed the win by blocking the third.

The dramatic finish overshadowed another significant development on Albert Lea’s squad: Tyler Vandenheuvel is back after he tore the anterior cruciate ligament in his knee, which kept him sidelined the majority of soccer season.

Kreuscher said Vandenheuvel’s first practice after his injury was Tuesday.

“He’s got a long way to go to get back in shape, but he brings confidence and leadership to our team,” Kreuscher said. “He’s going to help us.”

The charity stripe presented a problem for the Tigers in their last two outings. Albert Lea left 28 points on the court with misses. However, the Tigers only missed six of 24 attempts against Mankato East.

“I’m really happy that we knocked down our free throws,” Kreuscher said. “We were much improved.”

Defensively, the Tigers found their groove when Kreuscher called for a 2-3 zone.

“We finally found a defense that they struggled in,” he said. “They didn’t seem comfortable. We got a lot of deflections, a lot of tips and were really active.”

“The message after last game was, ‘How are you going to respond,’” Kreuscher said. “They just answered that. We’re headed in the right direction with our mental toughness.”

In addition to scoring the last four points of the game, including the game-winning free throw, Kilby led the Tigers with 12 points. He also had a team-high five steals.

“He (Kilby) was attacking the basket and has played three really good games in a row,” Kreuscher said.

Cody Scherff and Dedoch Chan led the Tigers in the paint. Scherff had a double-double and grabbed a team-high 13 rebounds. The duo combined with 20 points and 21 rebounds.