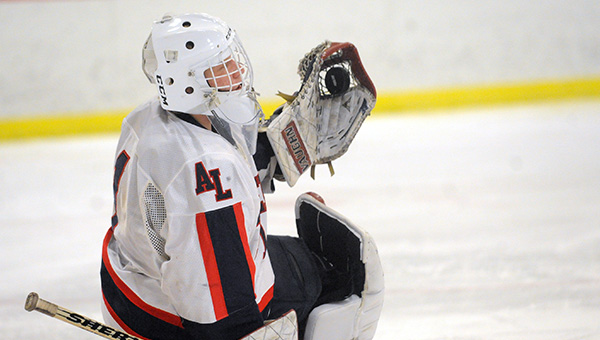 The Albert Lea boys’ hockey team was able to play competitively against a tough opponent, but the lack of scoring opportunities and penalties did the Tigers in.

“Defensively for the first two and a half periods, I thought we played pretty solid,” Albert Lea head coach Roy Nystrom said. “We kept them to the outside for the most part and our goaltender played well.”

New Prague scored one goal in the first and second periods before adding four goals in the game’s final stanza.

“The third period is usually the period where things get broken open, and that’s what happened,” Nystrom said. “We played our hearts out. I don’t know what to say after a game like this. They just controlled the game on us from the beginning to the end.”

New Prague scored two power play goals in the game. The Tigers were 0-2 with the extra man. Albert Lea got its best scoring chance on its second power play, thanks to some nifty passing on the point, but a point-blank shot was stopped by New Prague goaltender Conner Wagner.

“That was probably our best chance all night,” Nystrom said. “Probably the best we looked offensively too, but that’s the way it is.”

Scoring has been tough for the Tigers this season. They’ve scored 29 goals and given up 38. By comparison, Mankato West — the first-place team in the conference standings — has scored 94 goals.

“We got some quality shots, but not enough. That’s been pretty much the story of us all year long,” Nystrom said. “We haven’t scored many goals at all. I was telling them tonight, ‘Whenever you get an opportunity, put the puck on the net.’ But the game is so quick playing against this club, that they just didn’t get a chance a lot of times.”

The Tigers will be back in action at 7:30 p.m. Thursday when they travel to the Four Seasons Centre in Owatonna.