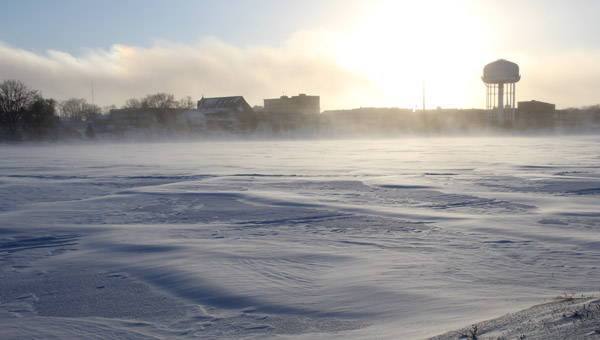 Twenty-six mile-per-hour winds from the northwest blow across Fountain Lake at 4:30 p.m. Sunday in Albert Lea.

Interstate 90 from Albert Lea to the South Dakota border is now closed because of hazardous conditions, according to the Minnesota Department of Transportation.

An emergency shelter is being set up at the National Guard Armory, 410 Prospect Ave. in Albert Lea.

MnDOT is asking motorists in the region to avoid travel because blowing snow today is reducing visibility.

A blizzard warning is in effect for Freeborn, Faribault, Steele and Waseca counties and most of western Minnesota. The same warning in Iowa is in effect for Worth and Winnebago counties, along with the north central part of that state. Mower, Dodge, Olmsted and Fillmore counties in Minnesota are in a winter storm warning. Almost all of the region faces dangerous wind chill levels, too.

The National Weather Service says places in the blizzard warning — in effect today and tonight — are expected to encounter northwest winds from 30 to 40 mph, with gusts up to 55 mph and 1 to 4 inches of fresh snow. On Saturday, about 3 1/2 inches of snow fell on Albert Lea, giving the wind plenty to blow around.

“Areas of blowing and drifting snow will persist into Monday,” the blizzard warning states.

Across the region, temperatures are expected to drop today from highs in the teens and 20s to 15 and 20 below by Monday morning. In Albert Lea, the forecast calls for a Sunday high of 22 degrees and an overnight low of 15 below.

The high for Monday is forecast at 10 below zero — which could break a record. The lowest high temperature for Jan. 27 is 5 below. Wind chill values on Monday morning are forecast sat 40 below.

Albert Lea, Austin and many area schools have canceled classes for Monday.

The wind chill warning is in effect through Tuesday. The air temperature on Monday night is expected to reach 20 below, sending wind chill values as low as 41 below, according to the National Weather Service.