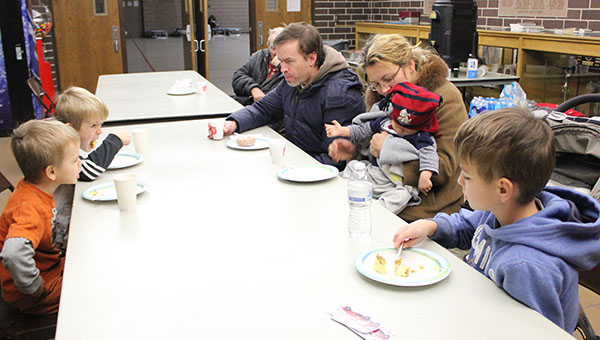 Interstate 90 closed on Sunday west of Albert Lea and into South Dakota because of blizzard conditions. 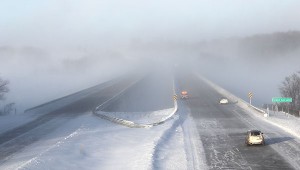 Visibility was limited Sunday, especially on the Interstate 35 bridges across Albert Lea, as strong winds pushed snow from the northwest and across the freeway. A semitrailer jackknifed on the northbound bridge Sunday afternoon. — Tim Engstrom/Albert Lea Tribune

The Minnesota Department of Transportation asked motorists in the region to avoid travel because blowing snow reduced visibility.

The freeway reopened at 8 a.m. today. State snowplow operators worked through the night and winds have subsided, MnDOT reported.

A blizzard warning was in effect for much of the region on Sunday and overnight. It lifted this morning, leaving driveways, streets and sidewalks blown over. Snowplows were out early to clear streets, highways and freeways.

A wind chill warning remains in effect through today, as the wind chill index is forecast to dip to 41 below zero with northwest winds of 15 to 20 mph and 30 mph gusts. The National Weather Service forecasts a high today in Albert Lea of 9 degrees below. The record high for Jan. 27 is 5 below. At 7:30 a.m., the air temperature was 11 below. 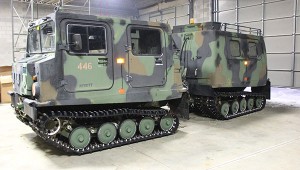 An emergency shelter was set up at about 5:30 p.m. Sunday at the National Guard Armory, 410 Prospect Ave. in Albert Lea.

The shelter housed 72 people, three cats and one dog, and another two people were housed overnight through the Salvation Army.

One of those people, Isaac Waithanji, was traveling north from Des Moines to Minneapolis with his wife, Joyce, and 3-year-old daughter, Nadya, when they pulled off of Interstate 35 at the exit to Trail’s Travel Center.

“We couldn’t see much,” Isaac Waithanji said. “There were too many cars in the ditch, so we decided not to go anymore.” 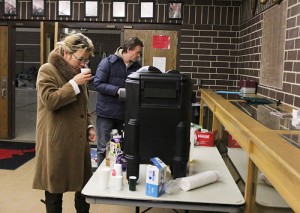 Natalya and Wilhelm Dick get some coffee at the emergency shelter set up at the National Guard Armory in Albert Lea this morning. — Sarah Stultz/Albert Lea Tribune

He said they tried to book a motel but were unable to find one. They arrived at the armory at 10 p.m. and planned to leave this morning.

The Salvation Army provided snacks, water, coffee and breakfast for the stranded motorists, which many said they were grateful for.

“It was a very nice reception,” said Wilhelm Dick, who was traveling from Minneapolis to Kansas City, Mo.

He said they got pulled out of the snow by a tow truck once about 10 miles north of Albert Lea and had to drive on the shoulder to get through at one point. 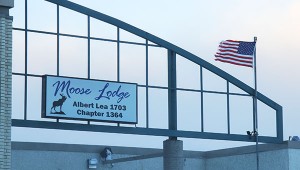 “We saw so many cars in the ditches — trucks and big trucks, too,” he said.

Though the boys weren’t uneasy with the driving conditions, Dick said his wife was a little scared.

Many motorists traveling in the blizzard found themselves in ditches. Police scanners and 511MN.org — a traffic website operated by MnDOT — indicated drivers spun out and went off the roadways. A semitrailer jackknifed Sunday on the bridge over Albert Lea Lake for northbound Interstate 35. 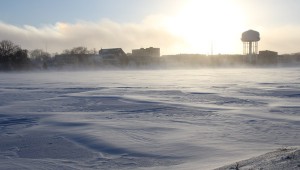 Authorities rescued three stranded Freeborn County motorists who were taken back to their homes, and another man who lost heat in his home in Hayward.

Dahlen and Freeborn County Emergency Management Director Rich Hall said Freeborn County Road 46 was blocked by cars and a semi. Tow companies were out this morning trying to clear cars from the roadways. 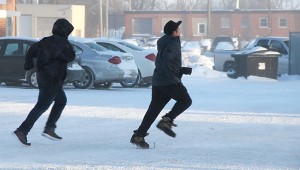 Sam Bingham, 10, left, and Darroll Foerster, 12, zip across a parking lot Sunday against a 26 mph northwest wind on their way to Nelson’s Shell gas station for pop and candy. — Tim Engstrom/Albert Lea Tribune

On Saturday, about 3 1/2 inches of snow fell on Albert Lea, giving the wind plenty to blow around. More snow fell Sunday, though how much was difficult to measure locally with all the blowing snow. A National Weather Service snowfall website says the Albert Lea area received 1 to 2 inches Sunday.

The strongest gust in Freeborn County on Sunday was reported at 6:40 p.m. five miles southeast of Twin Lakes. The wind speed was 52 mph, according to the National Weather Service. The strongest gust at the Albert Lea Municipal Airport was 46 mph, at 8:57 p.m.

New Richland-Hartland-Ellendale-Geneva had a workshop day for teachers, so classes were not planned for today. No one could be reached at Glenville-Emmons to determine its status today. It wasn’t listed by any media outlet.